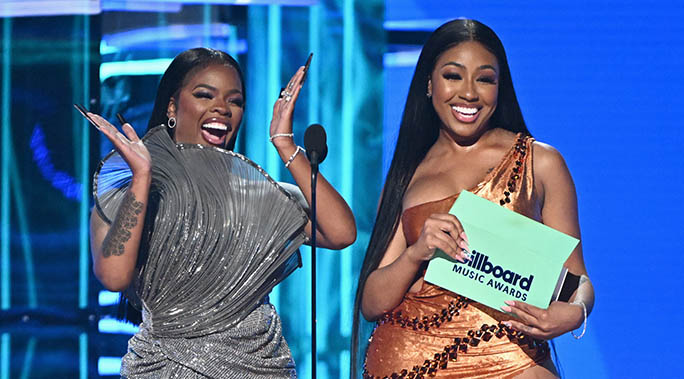 Celebrities brought their fashion A-game to the 2022 Billboard Music Awards held at the MGM Grand Garden Arena in Las Vegas on Sunday night. Among the star-studded roster was Miami’s very own City Girls. The hip hop duo consisting of JT and Yung Miami looked stunning as they stepped onstage to present Doja Cat with the Top R&B Artist Award.

When it came to the outfit, JT served high fashion in a sparkling silver mini dress. The glittery number was strapless but had a dramatic fabric that flared out and curved to one side creating a subtle shoulder design. The garment also had ruched detailing on the bodice and a long train that draped at the side.

She let her look do all of the talking by styling her hair straight and accessorizing with stud earrings and diamond bracelets. To add an elegant touch, JT rounded out her look with silver sandals. Yung Miami was a show-stopper in an asymmetrical bronze dress. She complemented the look with metallic sandals.

JT and Yung Miami initially arrived in matching black mesh dresses. The fun frocks had a sheer shoulder and a purple ruffled hemline. The rap stars tied their looks together with pointy purple pumps.