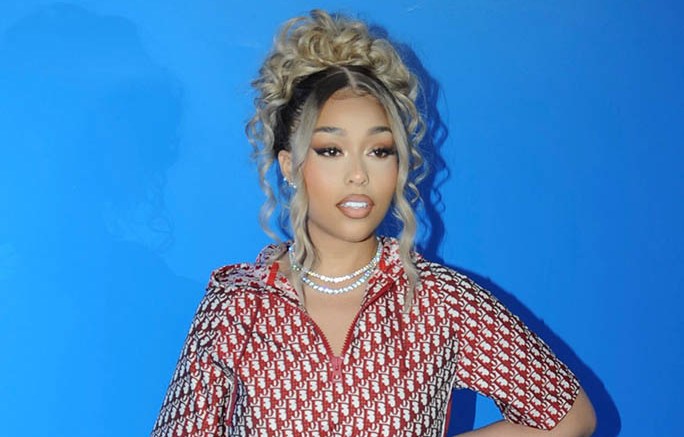 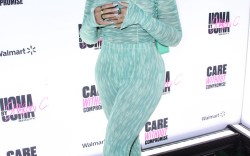 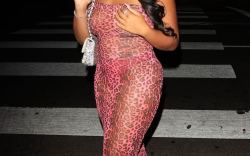 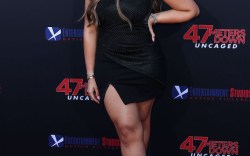 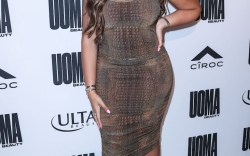 Jordyn Woods brought her cozy style sense to the Dior Men’s Spring 2023 collection show in Venice, Calif. on Thursday. The fashion influencer and style maven arrived on the blue carpet with her boyfriend Karl Anthony-Towns.

Woods hit the scene in a short hooded dress by Christian Dior. Crafted in burgundy technical taffeta jacquard with the hallmark Dior Oblique motif. The garment is further enhanced with an embroidered bee emblem and an elastic waistband and drawstring cord.

The social media personality added a touch of glitz to her look with a sparkling bracelet, layered diamond necklaces and white shades. Her newly-dyed blond and brunette tresses were pulled up into a curly bun, while two strands framed her face. Completing her look was a pair of pointy white pumps. The glittery silhouette prompted a preppy-chic vibe, due to the large bow on the side and sharp stiletto heel. Karl-Anthony Towns was equally as stylish, stepping out in a grey textured set that was adorned with patches. The Minnesota Timberwolves ball player pairing the outfit with a Dior shirt and black leather shoes.

The Dior Men’s Spring 2023 fashion show brought out some of the biggest names in Hollywood. Set against an impressive ocean-themed runway, just a few blocks away on Pacific Avenue in Venice Beach, the new capsule collection pays homage to the Californian atmosphere with the skateboarders. The iconic creations of the House are reinterpreted by highlighting the meeting between guest designer Eli Russel Linnetz of ERL and Kim Jones—who is now in his fifth year with the fashion house. The high fashion affair featured a star-studded guest list including Michael B. Jordan, Christina Aguilera, Jaden Smith, Paula Abdul, Rita Ora, Kelly Osbourne, Kid Cudi, Cordae, Tony Hawk, Nicola and Brooklyn Peltz Beckham, Winnie Harlow, Kimora Lee Simons and so many more.