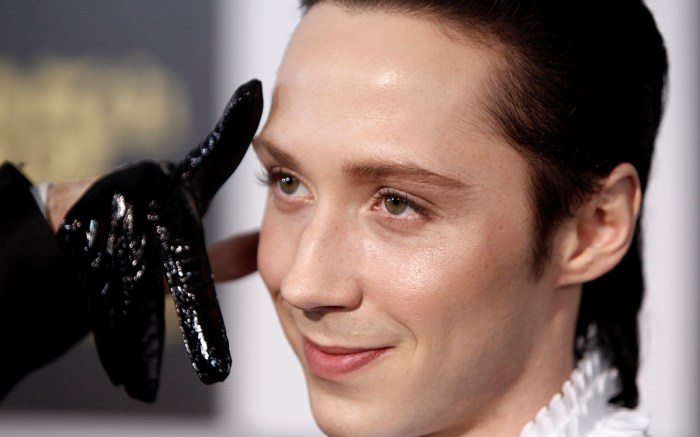 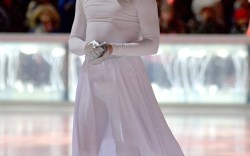 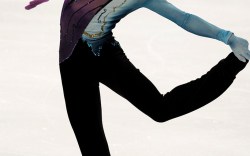 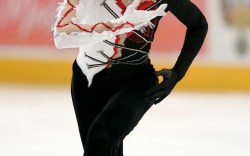 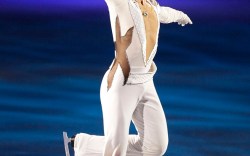 Johnny Weir is once again making a statement at the Winter Olympics. The former figure-skating Olympian has become known for his outfits over the years as a commentator for NBC. He first appeared on NBC, together with fellow figure skater Tara Lipinski (they even have a joint Instagram account), at the 2014 Sochi Olympic Games, and now he’s making waves for the Beijing Games.

On day one at work, Weir made a grand entrance wearing a matching feather suit by Orttu and Louis Leeman loafers.

In another standout ensemble on Feb. 5, Weir chose patent leather Christian Louboutin shoes with pants embellished with stars and a Veronica Beard blazer. (His hair paid homage to the aforementioned Bing Dwen Dwen.)

And earlier this week, he donned his most dazzling outfit yet, wearing a fringe pants by Frolov with a turtleneck and dramatic pearl necklace.

On Sunday, Feb. 13, Weir stepped up his shoe game wearing glittering Prada boots in gold. The platform boots featured a dramatic chunky heel, which popped against his all-black Mugler ensemble.

In another dramatic ensemble, Weir went with a neon pink look on Feb. 15. for a day of commentating. He wore a double-breasted blazer and cropped pants that showed off his platform white boots.

And recently, he chose a gold blazer and leather pants on Thursday, Feb. 17/

In November, Weir and Lipinski appeared on Season 19, Episode 5, to introduce the designers’ next challenge. In teams of two, the designers would need to create one look for Tara and one look for Johnny to wear for the 2022 Winter Olympics. Designers Bones Jones and Anna Yinan Zhou ultimately won the challenge with their pair of white ensembles.

The presumed Russian favorite Kamila Valieva — who despite testing positive for a performance-enhancing drug was allowed to compete — did not win an Olympic medal for women’s figure skating.

Weir is a two-time Olympian having competed in the 2006 and 2010 Winter Games, respectively finishing in fifth and sixth place. In 2010, Weir made headlines for skating to Lady Gaga’s “Poker Face” during his routine. He is also a three time U.S. National Figure Skating Champion, 2008 World bronze medalist, two time Grand Prix Final bronze medalist, and the 2001 World Junior Figure Skating Champion. Weir has appeared on a number of shows, most recently starring as Gabe on Netflix’s ice skating drama “Spinning Out” and “Dancing With the Stars” in 2020.

Keep checking back for updates on what Weir will wear next for the 2022 Winter Olympics.