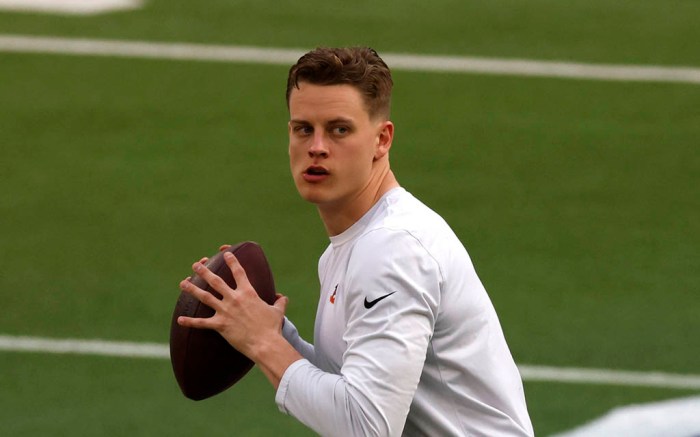 Joe Burrow pulled out all the fashion stops to ring in Super Bowl LVI in California.

While entering SoFi Stadium, the Cincinnati Bengals quarterback made a statement in a black and silver striped suit. Layered over a black shirt and coordinating tie, the look was topped with a black fedora and square-shaped sunglasses for a classic-meets-streetwear appearance. A dash of edge to his outfit was granted by its faint metallic sheen, while Burrow stayed grounded with a casual black backpack slung over his shoulder.

Burrow’s footwear was equally statement-making: a pair of Air Jordan 1 Low sneakers. However, the gray and white pair wasn’t your standard sneaker—these were made in collaboration with Dior, which bestowed a fashionable twist by papering Nike’s Swoosh logo with its signature “Dior” typeface. Currently, pairs of the style can retail for thousands of dollars, like the $8,735 pair on Farfetch.com.

The 2022 Super Bowl will take place between the Los Angeles Rams and Cincinnati Bengals on Sunday, February 13 at SoFi Stadium in California. At the game’s start, country musician Mickey Guyton will sing the National Anthem, while Jhene Aiko will cover “America the Beautiful.” The 2022 halftime show features a variety of performers this year, including Dr. Dre, Snoop Dogg, Eminem, Mary J. Blige and Kendrick Lamar.

One of the game’s most fun elements are its commercials, which can become iconic for their content and celebrity cameos. This years’ include Arnold Schwarzenegger, Salma Hayek, Lindsay Lohan and Trevor Noah in clips for BMW, Planet Fitness and Uber Eats.