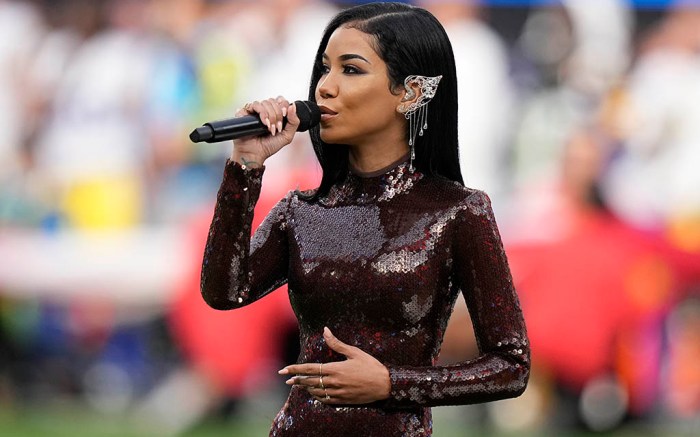 Jhene Aiko dressed glamorously at the 2022 Super Bowl LVI for a special performance of “America the Beautiful,” accompanied by a harpist.

While singing the classic song, the Grammy Award-winning musician sparkled in a long-sleeved gown with a mock-neck silhouette. The bold piece, which also included a daring thigh-high slit, featured allover sequins in a dark brown hue. The sleek number was paired with gleaming sparkling ear cuffs for a futuristic appearance, complete with cascading diamond pendants.

When it came to shoes, Aiko cemented her look with pointed-toe pumps. The style appeared to feature coordinating brown soles, similar to Aiko’s dress, as well as stiletto heels totaling at least 3 inches in height. The pair’s most glamorous statement, however, came from their PVC front uppers and sparkling crystal embellishments, which elongated their silhouette and enhanced Aiko’s slick glamour.

The 2022 Super Bowl will take place between the Los Angeles Rams and Cincinnati Bengals on Sunday, February 13 at SoFi Stadium in California. At the game’s start, country musician Mickey Guyton will sing the National Anthem, while Jhene Aiko will cover “America the Beautiful.” The 2022 halftime show features a variety of performers this year, including Dr. Dre, Snoop Dogg, Eminem, Mary J. Blige and Kendrick Lamar.
One of the game’s most fun elements are its commercials, which can become iconic for their content and celebrity cameos. This years’ include Arnold Schwarzenegger, Salma Hayek, Lindsay Lohan and Trevor Noah in clips for BMW, Planet Fitness and Uber Eats.
See more fashionable Super Bowl moments through the years.