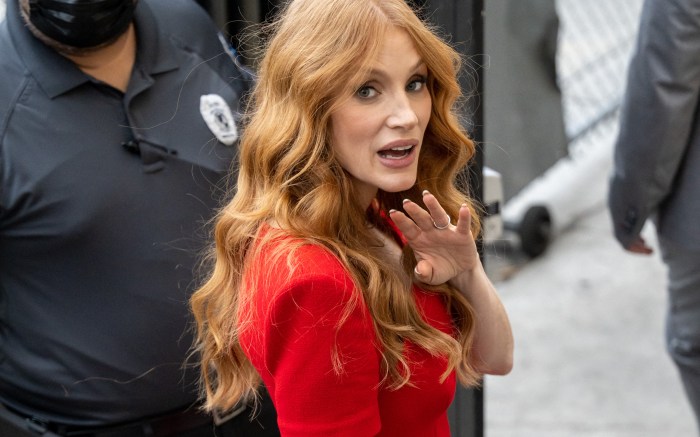 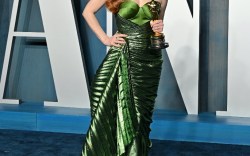 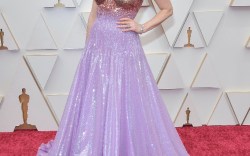 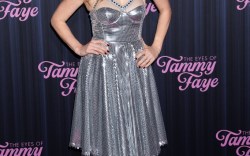 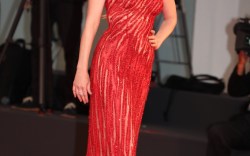 Jessica Chastain stopped by “Jimmy Kimmel Live!” to talk about Halloween, her new movie “The Good Nurse,” and meeting with President Zelensky in Ukraine. The actress was photographed leaving the ABC studios in Hollywood after her interview, which aired yesterday night. Chastain looked fiery.

The actress opted for a red corset minidress with stiff shoulder pads and cap sleeves. Chastain went subtle with the jewelry with only a gold ring matching her polished nails. She kept her natural red hair in a soft wave style with her subtle makeup featuring a smokey eye and a nude lip.

For her footwear, Chastain chose a timeless pair of nude pumps by Christian Louboutin creating a barely-there illusion. The pointed-toe pumps featured a 6-inch heel. The designer’s popular stilettos were released over 9 years ago as part of their fall 2013 collection.

The film producer flew in for the talk show from England where she premiered her new film “The Good Nurse” at the BFI London Film Festival. Chastain played Nurse Amy Loughren in the drama film alongside Eddie Redmayne and Kim Dickens. The crime story, which was inspired by the real-life crimes of Charles Cullen, was released in theaters on Sept. 11.