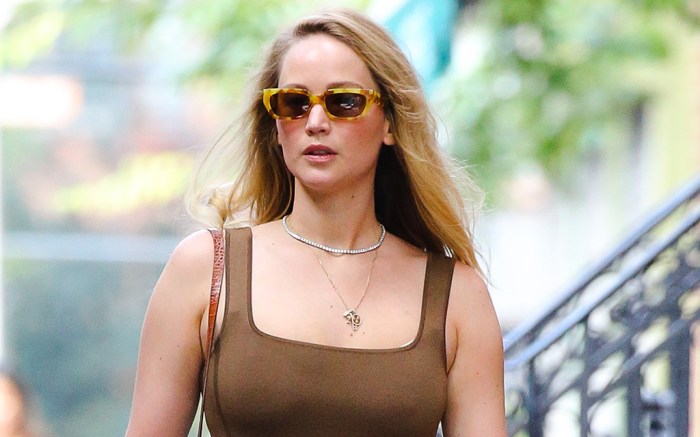 While playing mini golf on a stormy day in New York, Jennifer Lawrence answered 73 in-depth questions for Vogue in an almost 15-minute video posted to their YouTube channel today. Lawrence was dressed in slouchy trousers and relaxed footwear while answering questions like “What it takes to be a real New Yorker” to what it was like working with legends like Christian Bale and Robert De Niro.

Despite the oncoming rain, the former “Hunger Games” starlet featured a sunny disposition, wearing a white cropped tank top which she paired with tan pleated high-waisted trousers fitted with a belt in the same neutral shade. Layering on the accessories, Lawrence wore stacked stone-laden gold chains and camouflaged herself in dark brown turtle shell chunky shades that eclipsed most of her face before she took them off halfway through the video.

Descending onto the climate change themed course, the video briefly shows Lawrence in what appears to be black leather pointed toe loafers covered mostly by the bulky hem of her pants. Often made of leather, loafers are slip-on shoes worn by all genders. Loafers were first popularized in the 1950s amongst men, yet evolved over time into many styles and silhouettes. For men, loafers tend to be business-casual shoes; for women, they can also be lug-sole shoes synonymous with schoolgirl style.

Along with her impeccable acting career, the “Don’t Look Up” star also serves as a Christian Dior ambassador, starring in a series of campaigns for the French fashion house and oftentimes sporting sleek footwear and apparel from the brand both on and off the red carpet. When the mom of one isn’t golfing in loafers, Lawrence usually wears a few constant classics. Beyond Dior, Lawerence has been seen in pieces from Bottega Veneta, Chloe Gosselin Rosie Assoulin and more top names.