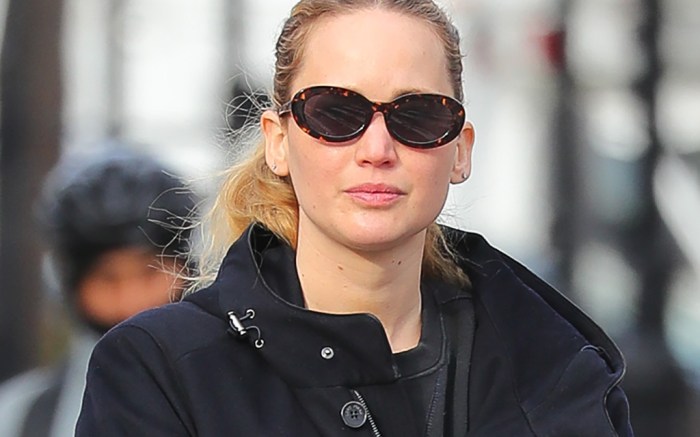 Jennifer Lawrence hit the streets of New York for a walk today with her son Cy.

Pushing a stroller, Lawrence and her 6-month-old baby braved the cold. The “Don’t Look Up” actress wore a dark grey sweater which she paired with grey sweats, keeping casual. Overtop it all, Lawrence sported a cozy black jacket with a puffy oversized silhouette.

The actress tied her dark tresses back in a ponytail and added oval-shaped sunnies, bringing a sharp element to her rather simple but effective ensemble.

Most Ugg styles are accompanied by fuzzy faux-fur lining that offers the wearer added warmth, making them perfect for the cold weather. The footwear brand was created in 1978 and it became popular with the Australian surfer scene at the time before blowing up in America in the late 90s and early 2000s.

Lawrence often makes sharp shoe statements, preferring styles that are classic and versatile. When on the red carpet, the “Hunger Games” star frequently wears pumps, sandals and wedged heels from brands including Gianvito Rossi, Gia Borghini and The Attico. Her off-duty style also includes strappy sandals and mules from The Row, Bottega Veneta and Simon Miller. When casually dressing, however, Lawrence regularly wears Ugg boots and go-to slides from Oofos, Manolo Blahnik and Pierre Hardy, as well as sneakers by Reebok, Nike and Dior.