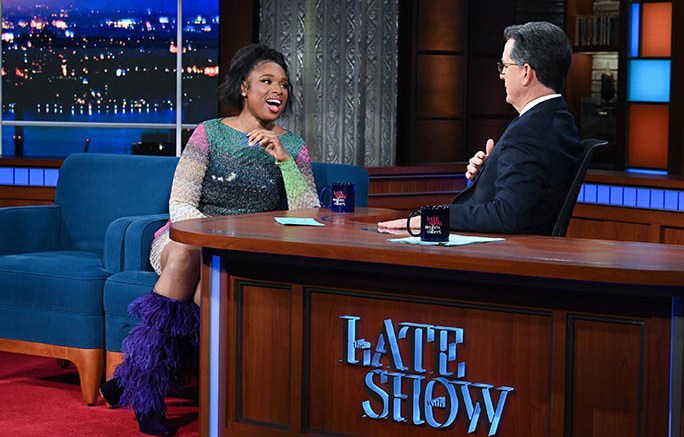 Jennifer Hudson was a show-stopper while appearing on “The Late Show with Stephen Colbert” on Monday. The EGOT award winner stopped by the late-night talk show to chat about learning television terminology, serenading an audience member on live television and dressing up as Whoopi Goldberg from “Sister Act 2” for Halloween.

Hudon was stylishly dressed for her appearance. The “Dreamgirls” actress wore a multicolored sequin minidress. The eye-catching piece had long fitted sleeves and transitioned into several colors throughout. To place more emphasis on her look, she accessorized with small diamond stud earrings and a few midi rings.

For glam, Hudson went with sharp winged eyeliner and a glossy neutral pout. The “Spotlight” songstress styled her hair in a high slightly waved ponytail and added bold blue pointy nails for another dramatic effect.

When it came down to shoes, Hudson slipped into a pair of dark purple knee-high boots. The silhouette took her ensemble up a notch as it included tiered tassels throughout. The shoe style also had a sharp, pointy toe and sat atop a thin stiletto heel.

When it comes to footwear, Hudson favors statement-making strappy sandals and pointed-toe pumps by Giuseppe Zanotti, Sophia Webster and Jimmy Choo on the red carpet. However, she also wears footwear by emerging designers as well, like Titi Adesa.