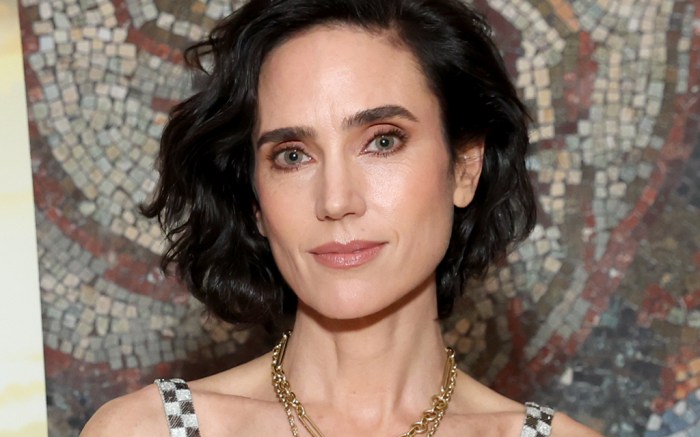 Jennifer Connelly attended the a special CAA screening in support of Paramount Pictures’ “Top Gun: Maverick” at the Whitby Hotel Theater yesterday in New York. The “Requiem for a Dream” actress was dressed semi casual for the event, sporting breezy wears and monogrammed pumps that gave Connelly a casual “cool girl” vibe.

The former child model wore a flouncy black blouse with checkered straps and geometric embellishments. The style was chock full of interesting tactile and visual elements. On the bottom, Connelly wore high waisted straight leg black trousers with a slight oversized fit, driving home that lax energy mentioned earlier. The fashionable thespian layered on gold pendant necklaces which she wore with a chunky gold bracelet. Her hair, as well as her makeup, were kept neutral and plain.

Opting for a sharp addition to her ensemble, Connelly wore a pair of glossy black pointed-toe pumps. The shoes featured block heels, around 3 to 4 inches in height, embelished with the Louis Vuitton logo in brown and tan. The sleek footwear also featured triangular toes and a sturdy construction that offered the Shiseido global brand ambassador a more comfortable experience. The shoe style boasted a classic silhouette beloved by many celebrities, including Connelly.

When it comes to fashion, Connelly has a personal clothing aesthetic that consists of elegant, edgy and classic pieces. She never refrains from taking fashion risks. The “Snowpiercer” alum is known for having an impeccable red carpet style and is a long-time devotee to Louis Vuitton.