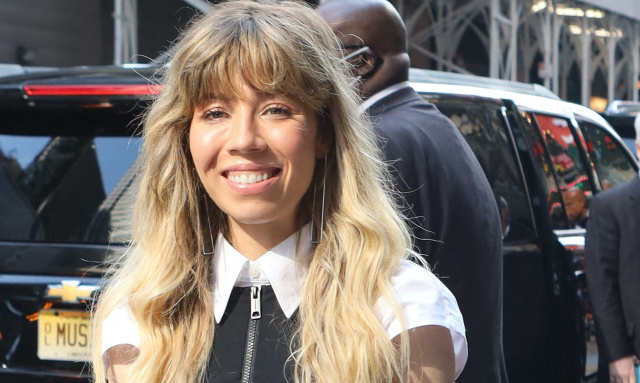 Jennette McCurdy made a striking arrival for her appearance on “Good Morning America” on Tuesday.

The Nickelodeon actress wore her signature blond hair down over her shoulders, with tousled bangs covering her forehead. Her face was bare, but she had some blush and shimmering lipgloss that added shine.

McCurdy wore a plethora of black and white staples, including a white pillowed short-sleeve top designed with an oversized appeal as it laid over her bottoms. The actress pulled over a cropped black sweater that ended at the middle of her waist. The sweater was sleeveless with a zip-up feature that brought sophistication to the attire.

For her jewelry, she wore a silver thick wrist cuff on her left arm and matching rings. The usage of silver made this look even edgier as it brought smaller but interesting details to the look.

The “I’m Glad My Mom Died” author wore a pair of cuffed leather shorts that stopped around her mid-thigh. They had a bit of an oversized look to them as well, which partnered well with the button-down.

To match her leather shorts, McCurdy finished her look with a pair of knee-high stretched leather boots to layer in even more style. The outfit personified both dramatic and simplistic aesthetics in a variety of ways, which made the outfit pleasing to look at.

The quaint heel of the boot allowed for support but still brought a chic flair to the outfit. The shorts with the boots were a great duo as well because if her bottoms were any longer, it wouldn’t have highlighted the boots correctly.

PHOTO: From the 1920s to Today: High Heels Through the Decades