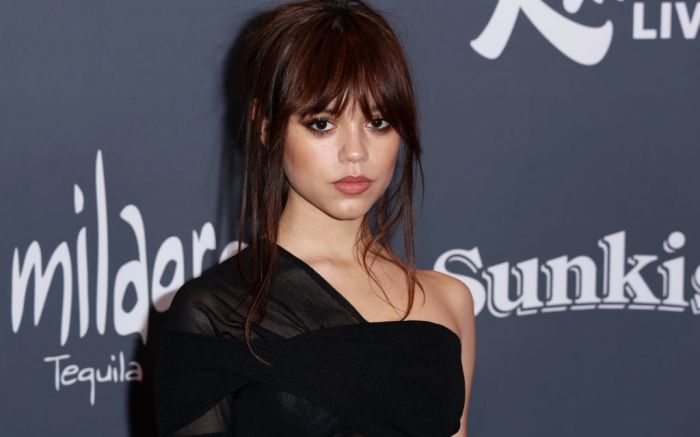 Jenna Ortega served edgy glamour as she spoke on stage at The Critics Choice Association’s 2nd Annual Celebration of Latino Cinema & Television on Nov. 13 in Los Angeles. The actress, who will star in Netflix’s “Wednesday,” was awarded the Rising Star Award for Television.

Ortega wore a sheer black Saint Laurent dress for the event. The one-shoulder gown featured mesh fabric with a ruched fitted silhouette. The ensemble followed down her arm transforming into a glove.

To accessorize, Ortega opted for a pair of sparkling silver-toned teardrop earrings and a statement ring.

Ortega kept her dark brown hair in a bun with face-framing pieces left out and bangs faced forward to bring attention to her dark smokey eye and red lip. The actress worked with hairstylist David Stanwell and makeup artist Melanie Inglessis on this look.

For her footwear, the “Fallout” star slipped into a pair of black platform heels. The open-toe heels were fastened by an ankle strap that was slightly covered by sheer material. The actress brought towering height to the look with a block heel and a platform sole.

The daring look was created by Enrique Melendez who has also worked with Jaylen Barron, Julia Butters, and Lyric Ross.

This appearance comes just before Ortega makes her debut role as Wednesday Addams in the new Netflix series “Wednesday”. The former Disney Channel star will be accompanied on-screen by Catherine Zeta-Jones and Christina Ricci in the twisted series as the daughter of the infamous Addams family navigates her way through a new school. The highly anticipated show will premiere on the streaming platform on Nov. 23.