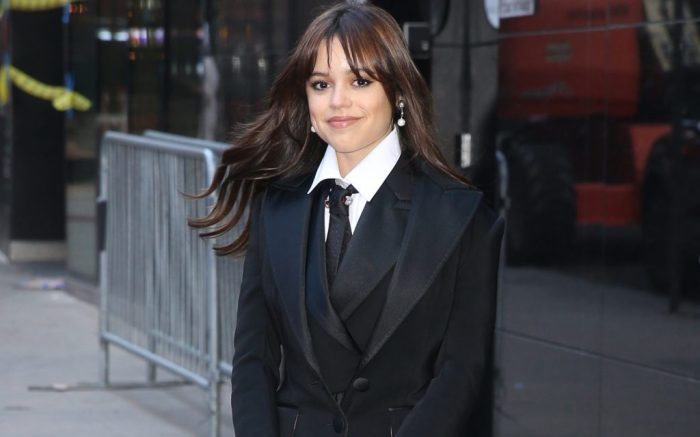 Jenna Ortega dressed up in a dapper manner for her appearance on “Today” show with Hoda Kotb and Jenna Bush Hager. The actress is currently on a press tour to promote her new role as Wednesday Addams in the much-anticipated television series “Wednesday,” the most recent take on The Addams Family franchise.

With Hoda and Jenna, Ortega discussed her love for the horror fiction genre, the difficulties of filming in a frigid Romanian location, and her rising star status since her first appearance on the hit television series “Jane The Virgin.”

For the televised interview, Ortega arrived in a black satiny double-breasted, wide-lapeled suit with a white button-down shirt and a coordinating black tie. Over the suit, walking out into the chilly streets of New York, Ortega wore a black single-breasted trench coat with a light-brown cheetah print inner lining.

Ortega styled the dapper ensemble with a few simple band rings, a pair of dangly pearl earrings, and a small square, maroon-colored Dolce & Gabbana handbag, adding a fresh pop of color to an otherwise monochromatic look. The actress wore her dark brown locks down in simple waves with whispy side bangs and had on a natural makeup look consisting of a glowing complexion, a nude-brown lip color, and a slightly smokey eye.

The long hem of the pants hides the majority of Ortega’s shoes, revealing a glimpse of silver rounded-toe platform shoes. The shoe likely elevated her outfit by at least 3 inches.

This appearance comes a few days Ortega makes her debut role as Wednesday Addams in the new Netflix series “Wednesday”. The former Disney Channel star will be accompanied on-screen by Catherine Zeta-Jones and Luis Guzmán in the twisted series as the daughter of the infamous Addams family navigates her way through a new school. The highly anticipated show will premiere on the streaming platform on Nov. 23.