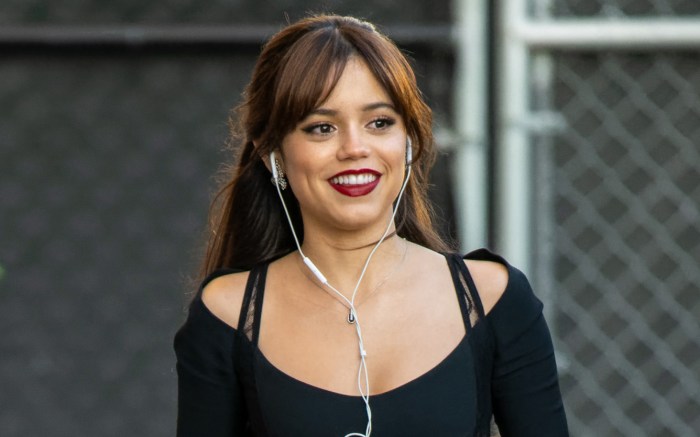 Jenna Ortega stopped by the ABC studios in Los Angeles to visit the set of “Jimmy Kimmel Live!” The former Disney Channel star spoke with Kimmel about doing McDonald’s commercials as a kid, going to Disney Prom, and working with Tim Burton and Christina Ricci in the new Netflix show “Wednesday.”

Ortega wore a black Dion Lee cutout lace midi dress for her television appearance. The dress featured a thigh-high slit on the side and off-the-shoulder long sleeves. The fitted silhouette is from the designer’s fall 2022 collection.

As for accessories, Ortega opted for silver-toned jewelry with a set of rings and a sparkling pair of diamond triangle earrings. She also added a pendant necklace to the look.

Ortega kept her dark brown hair in a half-up style with her bangs facing forward bringing attention to her glamorous makeup that featured winged eyeliner and a red lip.

To complete the ensemble, the actress slipped into a pair of satin black Louboutin sandals. The sleek heels have a knotted gathering over the toe and are fastened with an ankle strap. Along with the 2-inch boosting platform, the sandals brought towering height to the look with a 6-inch stiletto heel.

This look was created by Enrique Melendez who has also worked with Jaylen Barron, Julia Butters, and Lyric Ross.

This appearance comes just before Ortega makes her debut role as Wednesday Addams in the new Netflix series “Wednesday”. The former Disney Channel star will be accompanied on-screen by Catherine Zeta-Jones and Luis Guzmán in the twisted series as the daughter of the infamous Addams family navigates her way through a new school. The highly anticipated show will premiere on the streaming platform on Nov. 23.