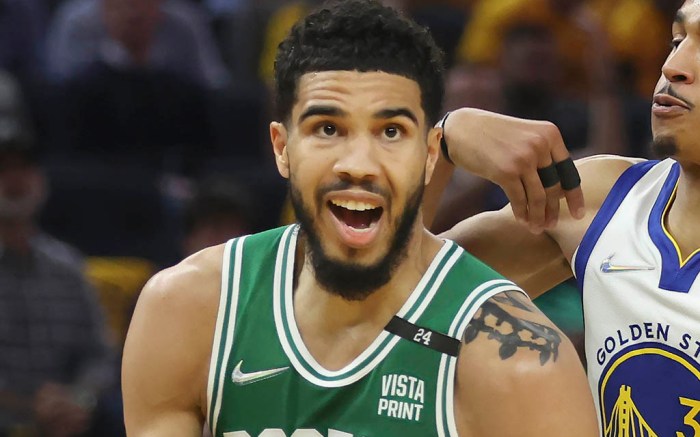 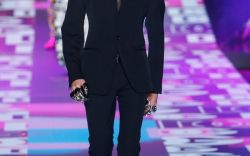 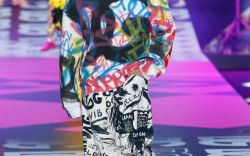 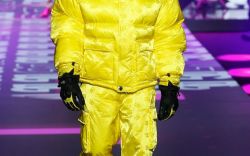 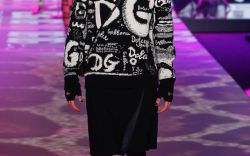 Jayson Tatum may be fighting for the NBA championship title, but he’s also putting in work to become the best-dressed player in the tunnel. And, as we all know, making some serious style moves doesn’t come without taking risks. For Game 1 of the NBA Finals last night, Tatum wore an eccentric ensemble that quickly went viral, dividing fashion-loving basketball fans into two categories: drip or dud.

To strut into the locker room prior to the championship game, the 24-year-old Boston Celtics forward wore a polarizing Dolce and Gabbana blazer that was stylistically split down the middle. The right side of the jacket featured a navy and white pinstripe fabric with a colorful paisley lapel. The contrasting left side, however, featured a light pink jacket body and lapel with a black pinstripe panel on the lower half of the jacket front. Tatum wore the jacket’s sleeves rolled up casually into cuffs, revealing a leopard-print jacket lining. The star player wore a simple white tee under the open blazer.

The outfit was styled by Vick Michel’s UpNxT fashion agency, which often works with Tatum on eye-catching luxury outfits. Michel posted the outfit on his Instagram, leaving fans of the stylist to comment countless fire emojis and praising comments.

While much of that praise carried over to Twitter, with some fans calling the look “clean” and “fly,” others weren’t as welcoming to the experimental style. Some said the look was reminiscent of Batman villain Harvey Dent a.k.a Two-Face, while others likened the look to a blast from the past, saying it looked like an ’80s or early ’90s ‘fit.

Jayson Tatum got that Two-Face outfit on? pic.twitter.com/irRL9qYn2D

No matter your personal opinion, Tatum had a good night after changing into his emerald uniform to meet the Golden State Warriors on the court. The Celtics went on to win Game 1 of the Finals, 120-108. Game 2 is on June 5 at 8 p.m. ET.