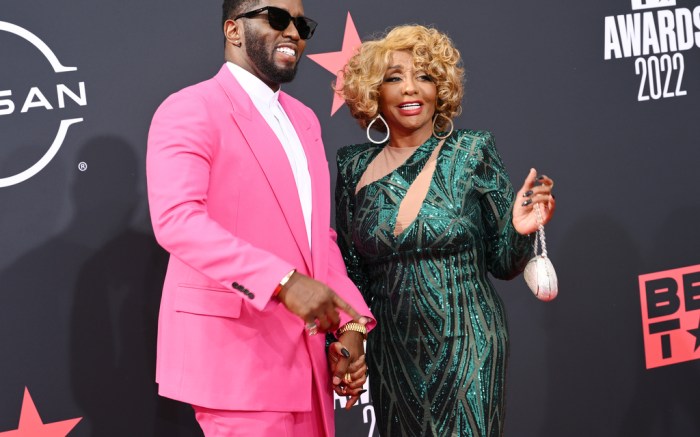 Sean “Diddy” Combs celebrated his prolific career and legacy at the 2022 BET Awards, receiving a Lifetime Achievement Award for his contributions to Black culture and entertainment. By his side was his beloved mother, Janice Combs, who pulled out all the style stops for the award show.

Janice Combs wore large drop-shaped silver earrings with the look, which peeked out from underneath her curled blond hair. She also wore several silver rings, carrying a silver upside-down heart bag decorated with pavé crystals and a beaded handle.

Diddy, who wore a bold pink suit for the occasion, celebrated his Lifetime Achievement Award with a show-stopping retrospective performance of his greatest hits. The star-studded performance—which was dedicated to his late girlfriend, Kim Porter—featured cameos by Mary J. Blige, Nas, Lil’ Kim, Busta Rhymes, Faith Evans, and more.

During his acceptance speech, Diddy thanked his mother for her role in his success, saying it was “her night” for all the sacrifices she made during his childhood, including working three jobs.

The BET Awards celebrate the achievements of musicians, actors, athletes and more throughout various entertainment fields. The first BET Awards took place in 2001 to celebrate Black culture and Black excellence. Taraji P. Henson was the host of this year’s show with performances by Lizzo, Latto and Jack Harlow.