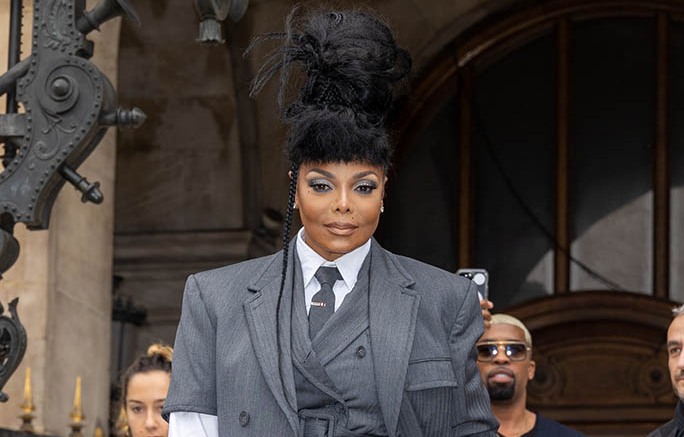 Jackson was undeniably a show-stopper at the presentation, putting her own trendy twist on a menswear-inspired ensemble. The “All For You” singer looked chic and sharp in a grey suit and matching dress. Her outfit featured an overcoat that had wide shoulder pads, asymmetrical sleeves, and a slight flare on the hem. Jackson teamed the piece with a double-breasted blazer and pleated dress.

Completing the award-winning entertainer’s look was a long-sleeve white button-down shirt and grey tie. To take her look up a notch, the “Poetic Justice” actress styled her hair in a massive updo that towered over the top of her head. She also let tapered bangs frame her face and left one long braided strand out.

The details didn’t stop there, for accessories Jackson carried a large patent leather Thom Browne handbag. The purse gave the illusion of a briefcase due to its wide straps and boxy shape.

Another eye-catching detail came from her Thom Browne heeled loafers. The silhouette was elevated at the front with a chunky round heel at the front near the toe and had a sculpted pyramid heel at the back. The shoe style also featured stitched lining and thin laces.