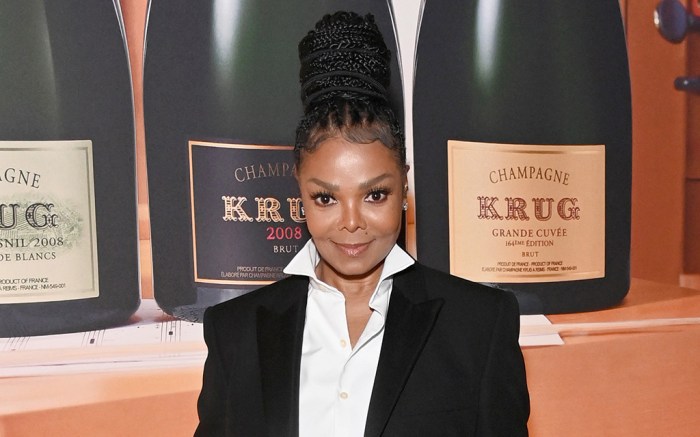 Janet Jackson attended an orchestral performance of Ryuichi Sakamoto’s “Suite for Krug in 2008,” hosted by Krug Champagne, at Alexandra Palace yesterday in London. The pop sensation stepped out for the musical night in a chic menswear-inspired suit and hidden heels.

Playing with proportions, Jackson styled a crisp white button-up with a popped collar tucked into her pants which she paired alongside an oversized double-breasted black blazer jacket. On bottom, the “Scream” singer opted for wide-leg trousers.

Due to the length of her trousers, it was not possible to take a look at Jackson’s shoes.

In a similar style, the performer attended Alexander McQueen’s Spring 2023 show in London wearing a sharp power suit and platform boots. Once again, Jackson wore a crisp white button-down shirt under a pea coat style suit jacket and wide-legged pants. Along with the suiting moment, the fashionable singer add a bit of edge in a pair of black leather boots with a round sole and 6-inch block heels that had Jackson towering over the crowd.

Although you can’t see her shoes thanks to the eclipsing hem of her skirt, Jackson’s style ranges from slick to sporty. The star often favors sky-high footwear by Christian Louboutin on and off stage, featuring platform sandals, boots and pointed-toe pumps. On the red carpet, she’s also been spotted in heels from luxury labels including Nicholas Kirkwood, Lanvin, Versace. For off-duty looks, the musician favors a range of styles, including Alaïa lace-up boots, R13 platform sneakers and Nike sneakers.