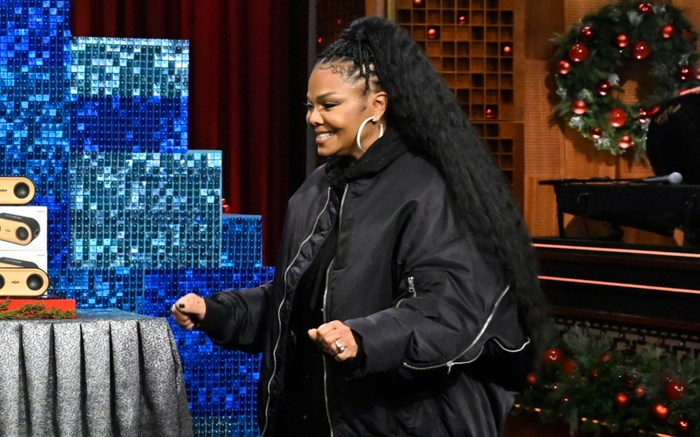 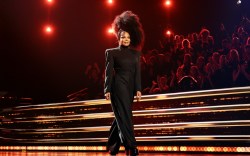 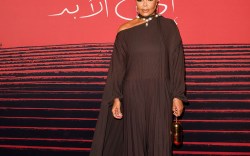 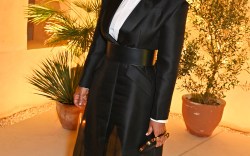 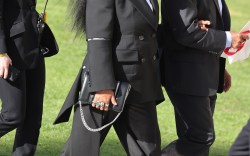 The pop icon joined Jimmy Fallon onstage to help with the holiday gift giveaway. Jackson invited two fans onstage to dance with her and Fallon and later gave the entire audience tickets to her “Together Again World Tour” at Madison Square Garden in New York City.

While appearing on the late-night talk show, Jackson served a monochromatic moment, adding two military-inspired pieces to her look.

The “When I Think Of You” singer wore a full all-black ensemble. Jackson’s outfit consisted of a bomber jacket that had puffy sleeves and a wide elastic waistband on the hem. The bomber jacket, formerly known as the flight jacket, was first designed for pilots to wear on military planes. Jackson’s version of the outerwear was edgier, with an oversized silhouette.

The Grammy Award-winning singer coordinated the jacket with a crystal-embellished sweatsuit. The two-piece set was adorned with sequins all over and included a hoodie and coordinating joggers. To amp up her look, Jackson accessorized with large white hoop earrings and several midi rings. For glam, she went with soft glowy makeup and a glossy neutral pout. She styled the front of her hair in knotless braids and pulled the rest up into a high straight ponytail.

Finishing Jackson’s look was R13’s Ankle jump boot. Made in Italy, the silhouette is crafted in leather and features signature orange stitching and Ecru embroidered pull tab. The shoe style also has a zipper closure on the side and a lightweight stacked sole.

Originally designed to be worn by soldiers on the battlefield, combat boots are utilitarian footwear created for foot protection, ankle support and a gripping tread. Classically made of black leather, combat boots were adopted by counterculture movements in the 1980s and 1990s, like the goth, punk, grunge and heavy metal scenes. The jump boot is a type of combat boot that was initially designed for paratroopers.

When it comes to shoes, Jackson’s style ranges from slick to sporty. The multi-hyphenate entertainer favors sky-high footwear by Christian Louboutin for all occasions, featuring platform sandals, boots and pointed-toe pumps. She’s also been spotted in heels from luxury labels including Nicholas Kirkwood, Lanvin and Versace.