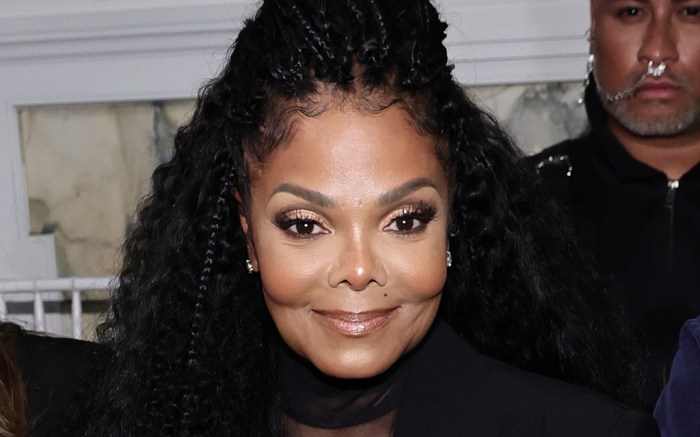 Janet Jackson had a front row seat to Christian Siriano’s Spring Summer 2023 ready-to-wear show held in New York wearing all black on Sept. 7, arriving with mass fan-fare and plenty of camera flash. The legend sat among an impressive line-up of fashionable faces.

Dressed in a mesh top, Janet made her mark, the style allowing for her bra top to peek through. The “Rhythm Nation” singer wore a sleek black blazer jacket which she paired with a lengthy black skirt that fell to the floor.

Accessorizing in a maximalist style, the 56-year-old stacked on sharp spiked black bangles, adding a bit of edge to the ensemble. Much like her outfit, Jackson’s makeup was smokey black with a wash of bronzy shadow on her eyes and a glossy brown nude on her lips. The dancer wore her brown curls in a half up half down voluminous style that accentuated the texture of her coils.

Although you can’t see her shoes thanks to the eclipsing hem of her skirt, Jackson’s style ranges from slick to sporty. The star often favors sky-high footwear by Christian Louboutin on and off stage, featuring platform sandals, boots and pointed-toe pumps. On the red carpet, she’s also been spotted in heels from luxury labels including Nicholas Kirkwood, Lanvin, Versace. For off-duty looks, the musician favors a range of styles, including Alaïa lace-up boots, R13 platform sneakers and Nike sneakers.

Set at the grandiose Elizabeth Collective, the famed former townhome of Elizabeth Taylor, models strode down a winding marble staircase dressed deliciously in mountains of tulle, wide brimmed hats, sleek suiting, sequined garments, and grungy leather. Siriano’s inspiration? Old Hollywood glamor. Pair that with a powerhouse front row of people like Coco Rocha, Alicia Silverstone, and now Janet Jackson, and you have yourself a fashion show to remember.