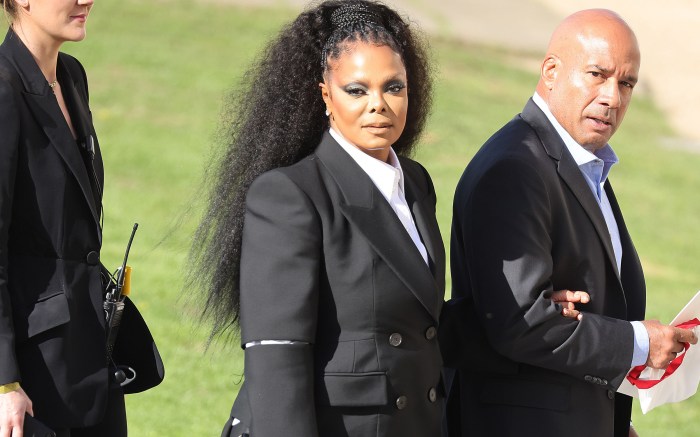 Jackson wore a crisp white button-down shirt with the collar laying flat on the hems of the suit’s lining. The suit jacket had a similar design to a pea coat as there were four buttons across the middle of her waist. The sleeve of the jacket had an acute detailing shaped like a rip. Matching the jacket, Jackson slipped into a pair of straight-legged pants that had lining detail on the side.

To add an edge to the already complete suit, she wore a pair of black leather boots with a round sole and 6-inch heels. As she walked to the show, the wind moved the fabric of the pant, showcasing her choice of footwear. These boots had a short platform, a great choice as they added a flair to the overall outfit and worked cohesively with the suit. The leather on the boots shined glossily when she was seen outside, and the different nuances of the black were graceful choices and made the white collar pop even more.

For the “Rhythm-Nation” singer, she wore a half-and-half hairdo, where her front was allotted in small braids, that wrapped around to create a kinky ponytail that flew down her back. She paired the hairstyle with a dark smoky eye that worked well with the dark suit, and to pull the rocker combination of the platform boots, she clutched onto an envelope purse with a biker chain.