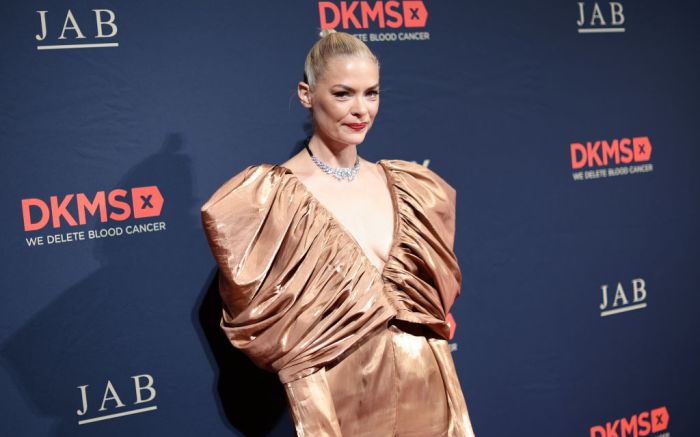 Jaime King attended the 2022 DKMS Gala in New York on Thursday. The 43-year-old actress wore a plunging, gold Jovana Louis jumpsuit to the event. King’s piece featured exaggerated sleeves and a lustrous train that cascaded out from her loose-fit pants.

King accessorized with a diamond necklace that featured a black chain. She opted for a solid white leather clutch.

For her footwear, the actress matched her handbag with white mules. The pointed-toe shoes featured a textured look with a silver stiletto heel. The mules are a part of a previous collection from Pupchen.

King kept her blond hair in a sleek bun, keeping the attention on her makeup, which featured eyeliner and a bold red lip. She worked with makeup artist Walter Obal for her glamorous look. He has also worked with other stars like Madison Bailey and Mackenzie Ziegler.

The “Transformers” actress opened the charity event as a longtime supporter of the non-profit organization DKMS. Other stars were in attendance, including Layna Bloom, Vera Wang and Mario Cantone.

King has been known for her vast shoe collection for years. The actress has been seen in styles like metallic pumps to over-the-knee suede boots. As a fashion forward star, King has collaborated with many brands in the past to bring her signature style to the retail market. In 2018, the actress worked with For Love & Lemons on a romantic fashion line that included everything from lace dresses to silk shorts.

Although she does have a wide closet filled with designer clothing brands, King focuses her attention the most to fine jewelry. The actress had launched collections with multiple jewelers like Juno Lucina in the past. Earlier this year, King collaborated with Sophie Ratner Fine Jewelry on a customizable pendant collection.