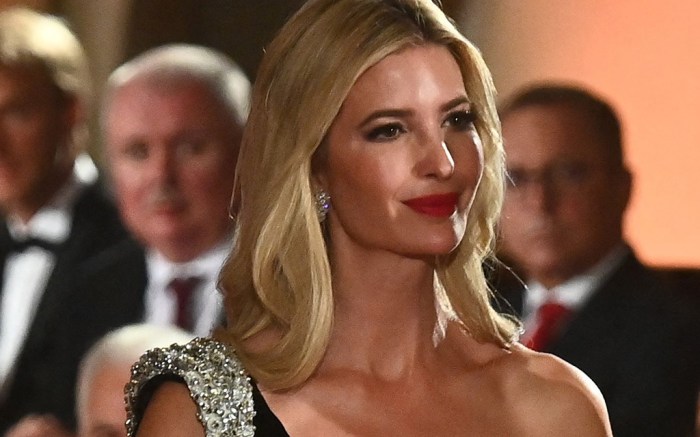 Ivanka Trump honored her mother, Ivana Trump, in a velvet gown and pumps at the Czech Independence Day Award Ceremony yesterday alongside her brother Donald Trump Jr. The ceremony took place at the Prague Castle in Prague.

The former White House advisor received a state award in memoriam of her late mother Ivana Trump, who was Czech-American, from Czech President Milos Zeman. The celebration was to mark the Czechoslovak Independence Day.

Ivanka’s dress was comprised of a black velvet base with sparkling chainmail detailing adorning the singular asymmetrical shoulder strap and jutting from the side near the waist of the garment.

Although they were not fully visible thank’s to her lengthy gown, Ivanka wore black sling back pointed pumps. Her shoe style typically veers into the versatile route, with a range of single-tone pointed-toe pumps from brands including Manolo Blahnik. Off-duty, she can also be seen in flats, thong and wedge sandals by Gianvito Rossi, Tkees and Aquazzura. Her casual shoes include sneakers by APL, Mizuno, and New Balance.

Whether on the red carpet or walking the runway (and seated front row), Ivana was noted for her glitzy fashion sense and ever-voluminous blond hair, both at their prime during her 15-year marriage to Trump. She died of injuries sustained from a fall on July 14 in her New York City home, according to the medical examiner and officials. She was 73.