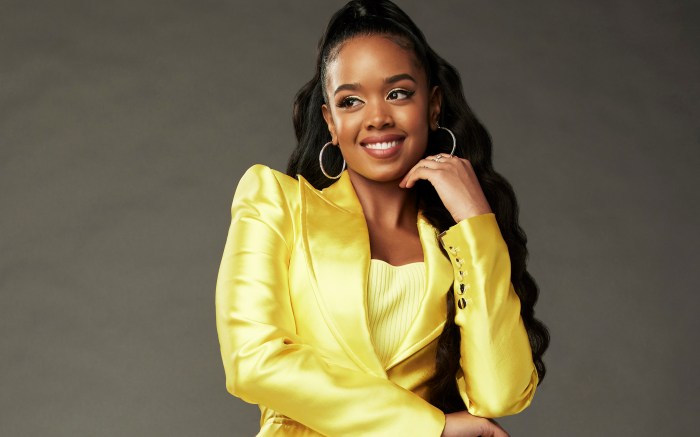 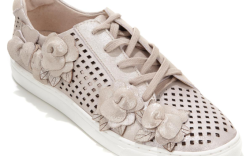 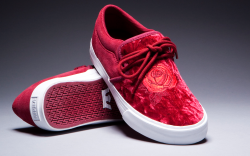 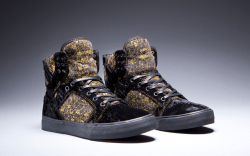 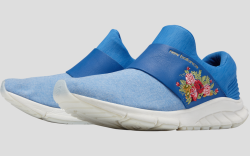 H.E.R. will star as Disney’s Princess Belle in ABC’s “Beauty and the Beast: A 30th Celebration,” which will air on the network on Dec. 15.

Posing for promotional pictures of the show, the “Where I Go” singer channeled a modern version of Belle in a yellow ribbed top which she paired with a vibrant yellow satin suit.

The blazer featured silver-toned details on the pockets and cascaded down to the floor with an attached train. She paired the top with matching high-waisted trousers. The look was inspired by Belle’s infamous yellow gown featured in Disney’s “Beauty and The Beast” from 1991.

H.E.R. completed the look by slipping into satin yellow peep toe pumps. The heels were layered with a tied bow that rested on the toe strap. The back of her pumps was hidden but they were most likely sporting a stiletto heel that was at least 4 inches tall.

The entire cast is working with Emmy-winning costume designer Marina Toybina who has also created looks for Carrie Underwood, Usher, and many stars on “The Masked Singer.”

As for her stage costumes, H.E.R. will wear different outfits in the live-action musical. All of her looks were inspired by the original Belle’s wardrobe.

“Beauty and the Beast: A 30th Celebration” features Martin Short, David Alan Grier, Rizwan Manji, Jon Jon Briones and Leo Abelo Perry who will play Chip, Mrs. Potts’ son. Musicians H.E.R. and Josh Groban will take center stage as the leads Belle and Beast. The two-hour reimaging of the beloved Disney story will air on ABC on Dec. 15 and on Disney+ the next day.

PHOTOS: All the Shoes Inspired By ‘Beauty and the Beast’