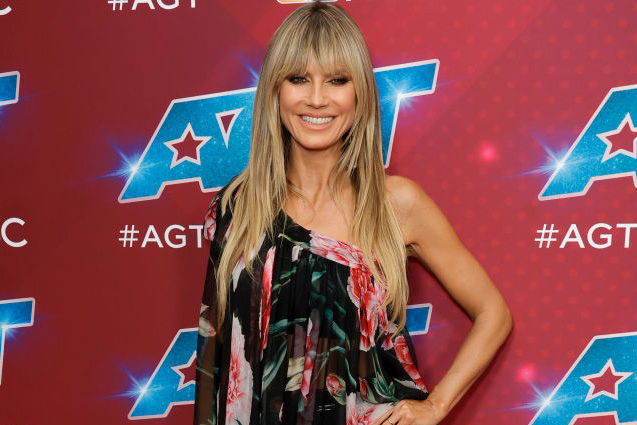 Heidi Klum made an entrance on the red carpet for last night’s live episode of America’s Got Talent at the Sheraton Pasadena Hotel in Pasadena, Calif. She is a panelist alongside Sofia Vergara, Simon Cowell, and Howie Mandell with host Terry Crews.

Klum arrived at the carpet wearing a Dolce & Gabbana ensemble which featured a one-shoulder flowing sheer top with an asymmetrical neckline silhouette and pink and red-hued floral patterns. Her outfit was paired with glossy latex black pants and ankle strap sandals of the same colorway by the luxury fashion house. Klum’s accessories entailed dazzling drop earrings and a colorful ring set.

Her look was styled by Rob Zangardi and Mariel Haenn, who has worked with the likes of Jennifer Lopez, Taylor Hill, Rita Ora, and Camilla Cabello. Zangardi and Haenn have styled Klum for a slew of events, including AGT’s August 24th show, where she wore a rhinestone embellished Dolce & Gabbana black dress, her recent appearance on “The Late Late Show with James Corden,” in Naeem Khan and a bright yellow Toni Maticevski dress for the 2022 Billboard Music Awards in May.

Klum has frequented styles by Domenico Dolce and Stefano Gabbana, such as for last Wednesday’s AGT episode wearing an emerald corset tulle gown with a bustier element, rhinestone adornments, and scintillating silver heels, a Barbiecore-themed one shoulder bright fuchsia mini dress and sculpted fuchsia heels on August 10th, and a hand-sewn jeweled jumpsuit to the luxury fashion house’s Alta Moda show in July as part of the four-day event.

Before yesterday’s show, she arrived at the set in an all-out leopard print look which incorporated a puffed-sleeve top, a sheer black skirt overlayed with the animal print element, heels, a tote bag, and frames to match.