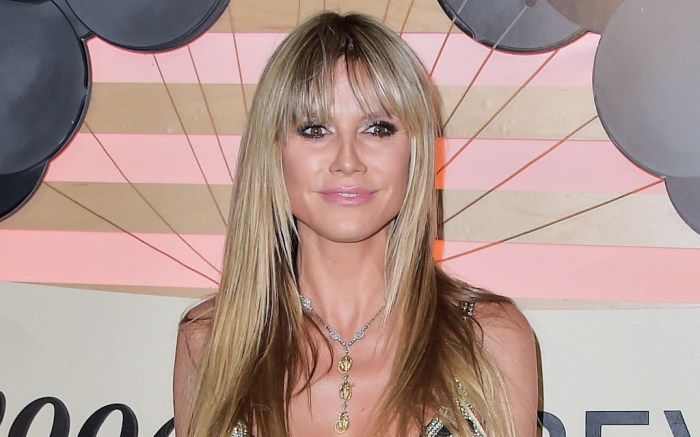 Heidi Klum continues to display her eye for fun fashion. The “Germany’s Next Topmodel” host and judge shared a video on Instagram Friday that showed the model wearing a metallic look that brought the shine, glimmer and sparkle into the weekend, according to Klum’s caption.

For the outfit, Klum wore a silver mini dress that featured an embellished, shiny pattern and long-sleeves. It also had an asymmetrical hemline and sleek high-neck silhouette for an edgy, modern feel. She accessorized with a pair of black shades for a unifying effect.

To complete everything, Klum donned a pair of silvery slouchy knee-high boots that had a sharp pointed-toe and a heel height of approximately three inches. As of late, Klum has shown her penchant for knee-high and thigh-high boots of all designs that tend to streamline her looks.

When it comes to Klum’s clothing tastes, she tends to fancy modern and trendy garments. For example, she recently wore a purple strappy dress and barely-there heels for a sleek outfit, and we’ve even seen her wear a 3D pop art Moschino nursery rhyme-inspired gown paired with pink metallic platform sandals for a whimsical, artsy aesthetic.

The “Making the Cut” host and judge has made a name for herself within the fashion industry over the years. She’s starred in campaigns for Liz Claiborne and Marc Jacobs. She also hosted Victoria’s Secret’s famous runway show for many years during the early aughts.

Follow Klum’s lead and put on a pair of silver boots for a fun twist to outfits.