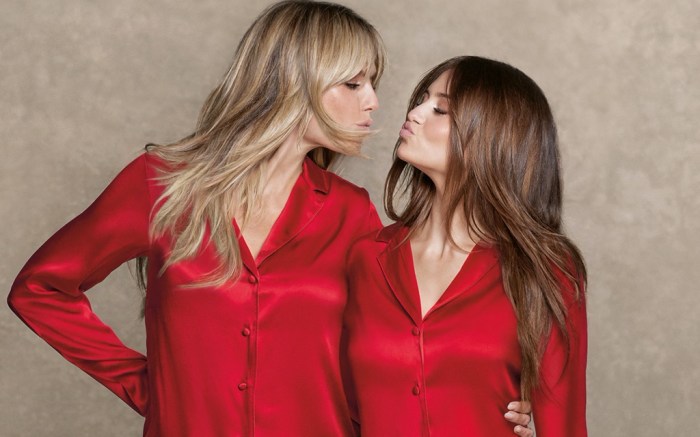 Heidi Klum and her daughter donned matching PJ’s in a recent campaign.

The supermodel and her daughter, Leni posed together for Intimissimi’s most recent campaign. The mother and daughter each wore the same outfit, consisting of a red silk long-sleeve button-down top and matching red silk pants.

The cranberry-colored pieces come just in time for the holidays, and the long sleeves and pants offer a warmer sleep for the chillier months. The top is available on Intimissimi’s website for $139 while the pants retail for $119.

The duo starred in another campaign of the Italian lingerie company not too long ago. In that campaign, they wore undergarments from the brand.

Though Heidi’s career in fashion and modeling is extensive and has continued for decades, Leni has begun to follow in her mother’s footsteps by pursuing her own modeling and branding career within the fashion industry. The two have recently been pictured stepping out at Milan fashion week to support About You, which Leni collaborated with. The collection between Leni and About You is known for its effortless staple basics and mission of sustainability.

Leni even posted at the brand’s fashion show that it was her second year walking the runway for the event. At the show, Heidi made sure to make her own fashion statement,  wearing a “no-pants” outfit that she went braless with a blazer. Leni wore an all-black leather tube-top set and trousers with black platform combat boots.