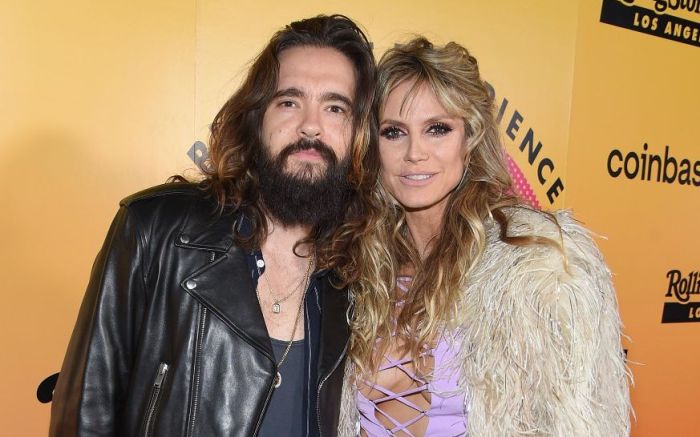 Model Heidi Klum was one of many stars to join in on the Super Bowl celebration over the weekend.

Rolling Stone held its annual Big Game Experience on Saturday and featured a whole slew of stars from Tinashe to Lil Jon. Klum, accompanied by husband Tom Kaulitz, wore a purple strappy mini dress with interesting cutout details at the waist and bust. The purple-pink shade looked great on the supermodel’s skin tone and the shape of the dress and skintight fit made for a striking look. The “Americas Got Talent” judge threw what appeared to be a faux fur jacket over the whole affair. The voluminous coat gave the ensemble some textural aspect and dimension that the dress on its own couldn’t provide. Aside from a bright red coat of nail polish, the model kept accessories to a minimum.

Kaulitz wore stripes on stripes, going for a more casual look. The musician layered a black leather jacket over a blue tee. Kaulitz’s pants were varying stripes of blue. He accessorized with some fun necklaces. For footwear, Klum stepped into some clear sandal heels with a purple sole that showed off her red pedicure. Kaulitz’s shoes were black leather slip-ons. The couple looked dashing together, serving two very distinctive looks successfully. While Klum opted for a dressier look, Kaulitz manages to pull off a boho-chic type of look flawlessly.