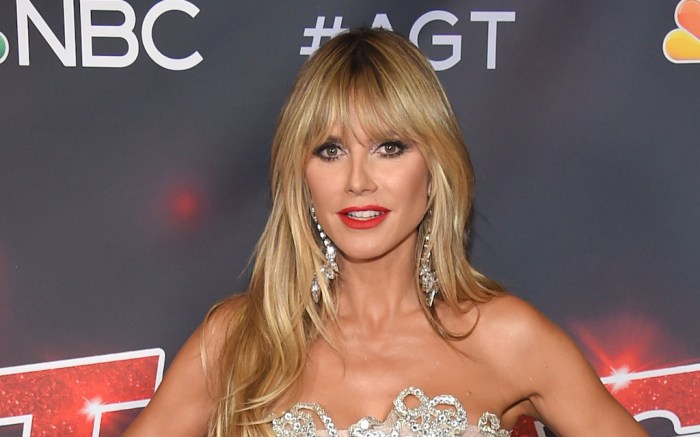 Heidi Klum makes a bold statement in clothing, and with her words, during her recent appearance on “Ellen.”

The “Germany’s Next Topmodel” host appeared on the program yesterday to promote her new song with Snoop Dogg, “Chai Tea,” while wearing an edgy look. She also talked about how her legs are insured, and that one is more expensive than the other.

“I didn’t insure them by the way. It was a client that insured them, it wasn’t me,” Klum told Ellen. “And one was actually more expensive than the other, because when I was young, I fell into a glass, and I have a big scar. Obviously, you can’t see it because I put so much spray tan on right now, you can’t see it, but yeah, so one was more expensive than the other one. It’s weird the things some people do.”

For the ensemble, Klum opted for a shiny hot pink latex minidress that featured sharp shoulders and draping across the front of the garment.

When it came down to the shoes, Klum slipped her feet into a pair of clear heels that incorporated a metallic heel that had a height of approximately 4 inches.

Klum has a trendy and modern sartorial aesthetic that gives her the opportunity to wear daring and fun creations. On her Instagram feed, she wears silhouettes like slinky tops, structured tailoring, flowy cardigans, edgy dresses, slouchy denim and intricate outerwear that all have that signature Klum flair. And for shoes, she usually pumps, sandals and boots that take her vibe to the next level.

The “Making the Cut” host and judge has starred in campaigns for labels like Liz Claiborne, Marc Jacobs and Victoria’s Secret over the years. Klum was also an Angel for Victoria’s Secret and hosted the fashion shows in 2002, 2006, 2007, 2008 and 2009.

Pop on a pair of clear heels for an edgy outfit elevation.