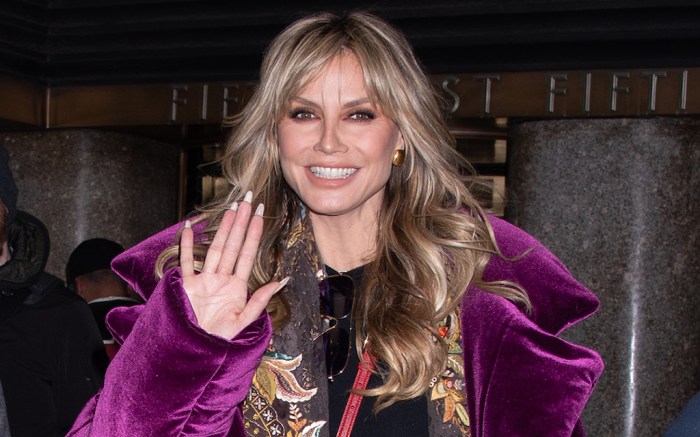 Heidi Klum looks like she never had before on Friday.

The “Germany’s Next Topmodel” host wore an intricately designed monochromatic outfit done in a nude palette on “The Tonight Show Starring Jimmy Fallon,” where she talked about making music with Snoop Dogg, and she even taught Fallon how to dance. The highlight of her appearance was a minidress that had a plunging neckline and fringe along the sleeves and hemline, plus cutout details.

Klum coordinated with a pair of Casadei nude thigh-high stiletto boots. The shoes had a pointed-toe design and had a height of approximately 4 inches.


After the show, Klum made yet another striking appearance while out in New York City later that night, combining several colors, textures and patterns in one clashing look that unexpectedly worked together.

Klum slipped on a pair of leopard-print stiletto boots that had a height of approximately 3 inches. The shoes were pointed-toe and came up to right above her ankles.

When it comes to the outfit, Klum wore a purple velvet puffer coat that incorporated a puffy collar and lapel. Under it, she went with a black top and patchwork denim jeans that had a variety of appliqués and embroideries applied on top of each other. All of the elements of her attire had ’70s-inspired vibes.


As for accessories, she carried a red leather handbag that had a long shoulder strap and featured gold hardware. She also wore sleek aviator shades and donned an embroidered scarf that had silver metallic fringe on the ends. Also, around her waist, she wore a burgundy reptilian belt that had an o-ring belt buckle.

Klum tends to don trendy and sophisticated garments that have a stylish flair. She recently wore a dominatrix-like outfit mesh and latex ensemble from David Koma coordinated with black latex knee-high boots. Also, we’ve spotted her wearing a crystal-embellished bodysuit paired with an oversized tweed jacket and black leather knee-high boots for a chic appearance.

The “Making the Cut” host and judge has made a name for herself within the fashion industry over the years. She’s starred in campaigns for Liz Claiborne and Marc Jacobs. She also hosted Victoria’s Secret’s famous runway show for many years during the early aughts.

Pop on a pair of leopard print boots for a wild look.