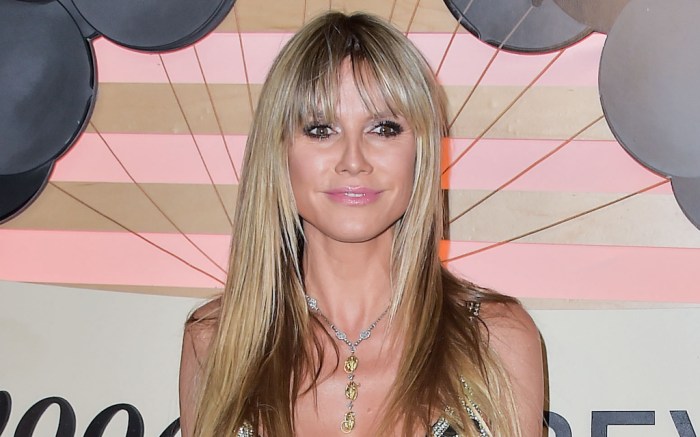 Heidi Klum continues to make a case for metallics. The “America’s Got Talent” judge shared a video on Instagram Wednesday that showed her posing, dancing and having fun with the creative directors of New York-based brand The Blonds as she promoted the newest season of “Germany’s Next Topmodel.”

Klum’s wore a cropped black leather jacket emblazoned with gold hardware and draped chains that acted as fringe for a glam-rock look. Underneath, she had on a dress with similar embellishments on the sleeves. The metal chains created cascades of fringe, that when she moved, exposed the black lining under its gold exterior.

To complete everything, Klum went with a pair of tall gold thigh-high boots. The shoes had a pointed-toe silhouette and had a height of 3 inches for a refined finish.

Klum is known for her daring and stylish clothing taste that she often debuts on Instagram. For example, she recently wore a Moschino nursery rhyme-inspired gown that had animated appliqués and embroideries paired with pink platform sandals. She also gave showgirl vibes for an appearance on “The Tonight Show Starring Jimmy Fallon,” where she wore a neutral-colored fringed minidress paired with matching over-the-knee-boots for a monochromatically edgy ensemble.

The “Making the Cut” host and judge has made a name for herself within the fashion industry over the years. She’s starred in campaigns for Liz Claiborne and Marc Jacobs. She also hosted Victoria’s Secret’s famous runway show for many years during the 2000s, and she walked in some of the shows in the ‘90s.