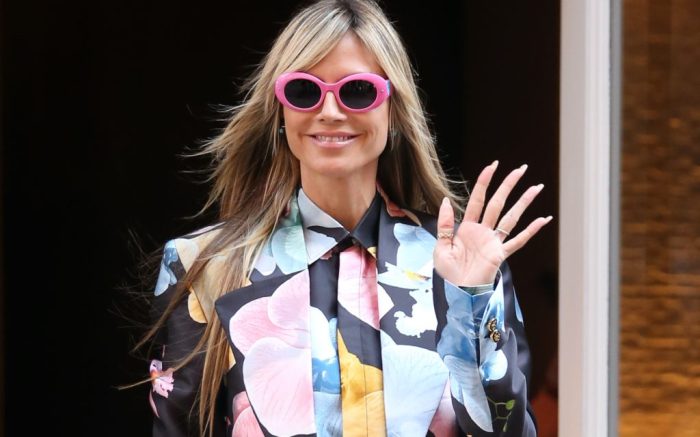 Heidi Klum was out in New York City today sporting floral staples. It’s not a surprise as this fashion model has made her love of prints apparent both streetside and on “America’s Got Talent.”

The model had on a floral three-piece from Georges Hobeika. The pattern had hits of light pink, blue and yellow contrasted by the black material. She buttoned her top all the way to the collar, and then put her blazer over it, and coordinated with straight-leg tailored pants that cut at her ankles.

The suit was an embodiment of summer as the print was playful, but the silhouette meant business. She accessorized the pink accents of the outfit with hot pink framed sunglasses with a dark lens.

As Klum usually does, she wore her blond hair out over her shoulders, letting the light colors of her tresses contrast around the mainly black attire.

There’s nothing like a sandal for a pantsuit, and the silver sandals Klum wore were an unexpected win for the outfit. The heels featured a satin ankle wrap and a slim band over the toe as well as a pointed sole. The simplicity of the shoe was helpful because of the campiness that the suit brought.