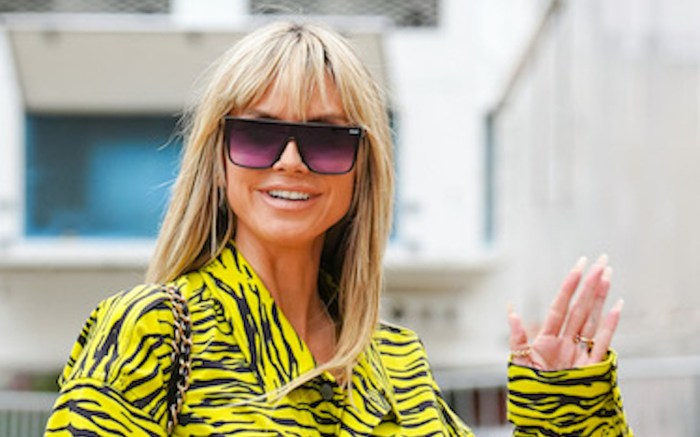 Heidi Klum shows how to go angelic in all-white. The “Germany’s Next Topmodel” judge and host shared a video on Instagram yesterday that showed her dancing and posing in a flouncy outfit alongside model and mother to Elon Musk, Maye Musk.

Klum donned a white feather-embroidered jumpsuit that had an off-the-shoulder design and featured sheer white underlays throughout the garment. The piece had a plunging neckline for a touch of edginess. The bottom of her suit got emblazoned with white feathers that added movement and volume to her tidy look.

Musk, on the other hand, wore a golden yellow cape dress that incorporated a flowy and open style that she paired with black floral-embellished lace tights and black flat booties.

White pointed-toe pumps grounded Klum’s monochromatic ensemble. The shoes had a height of approximately 3 inches and tied her attire together seamlessly.

On Monday, the “Making the Cut” judge and host was spotted arriving at the set of “America’s Got Talent” in a chic, vibrant outfit.

The style maven showcased yellow and black tiger stripes. On top, she wore a trucker jacket emblazoned with the print, and on the bottom, she wore a pair of slouchy trousers that gave her vibe a relaxed feel.

For shoes, she completed her look with black chunky platform boots that added a rugged touch. The boots had a height of approximately 3 inches.

The former “Project Runway” host and judge is known for creating her own lane within the fashion industry. She has starred in campaigns for brands like INC, Skims and Jordache. And in 2017, she launched her own clothing line in collaboration with the German retailer Esmara, which was a line of affordably priced statement pieces.

Put on a pair of white pointy pumps for a streamlined appearance.