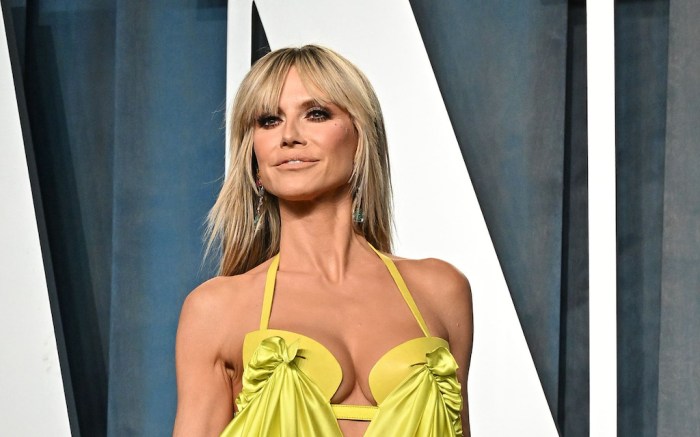 Heidi Klum comes up smelling of roses in an ensemble suitable for spring.

The model posted on Tuesday to her Instagram spinning around in a familiar outfit. She wore a dark mini dress covered in green and pink florals. The dress featured long sleeves and sparkly sequins that dazzled with every spin. She added a pair of black strappy heels to the ensemble. She wore this outfit to promote the new season of “America’s Got Talent.”

Season 17 of the popular “AGT” premiered last night on NBC. Klum serves as a judge on the competition series alongside Simon Cowell, Howie Mandel and Sofia Vergara.

The “Germany’s Next Top Model” host and judge shared a boomerang on Instagram in April that showed the her dancing and posing in the same striking look.

For this post, Klum wore the same black sequin floral-print minidress seen in her latest post that was both chic and festive. It had long sleeves as well for a uniformed finish.

On the footwear front, Klum wore a pair of black sandals from Dolce & Gabbana. The heels had an ankle and heel strap for extra security. The shoes sat upon a gold “DG” on both feet for a glitzy look. The shoes retail for $1,195.

Klum is known for her sophisticated yet daring clothing tastes. For example, she recently wore a boxy silver moto jacket paired with high-waisted jeans and matching metallic pointed-toe pumps for a rugged yet fun attire for “America’s Got Talent.” Also, she recently donned a red, black and white plaid minidress combined with black stockings that had a stylish line placed down the middle with black platform boots while dancing and posing with Pabllo Vittar for “Germany’s Next Topmodel.”

The “Making the Cut” host and judge has made a name for herself within the fashion industry over the years. She’s hosted Victoria’s Secret’s famous runway show for many years during the 2000s, and she walked in some of the shows in the ‘90s. She has also starred in campaigns for Liz Claiborne and Marc Jacobs.

Put on a pair of black sandals for a chic appearance.