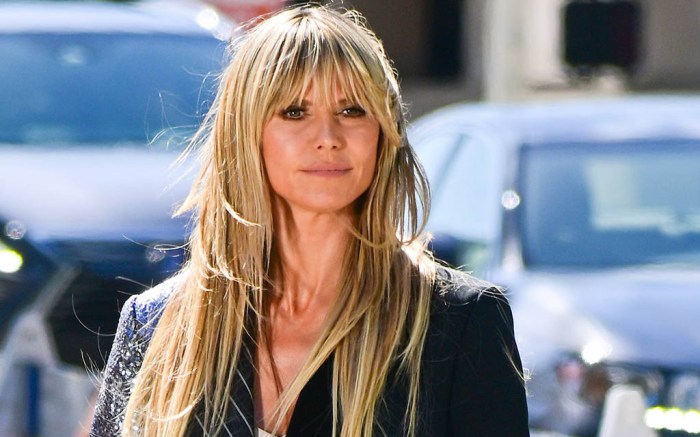 As the general definition of a fashion icon, Heidi Klum can make just about any outfit look like it was made for her and only her. Call it that supermodel confidence at work. But fans of the 48-year-old model and television personality know Klum has a special affinity for a well-fitting suit with sleek feminine touches.

Well, Klum’s suiting style preference was on full display yesterday when the star hit the streets of Los Angeles with Sofia Vergara to film a scene for an upcoming episode of “America’s Got Talent.” During the shoot, Klum was seen wearing a unique oversized black suit jacket with silver sequins covering just the right side. That same side of the jacket also featured a large pinstripe lapel and rhinestone paved buttons to enhance the eccentric asymmetrical design. The TV personality paired the statement jacket with a pair of tapered black trousers, which were impeccably tailored to her frame.

Showing that you can indeed mix metals, the model wore black Dolce & Gabanna single-strap sandals, which featured a bold D&G monogram heel in gold. The popular sandal style retails for $1,195 on the brand’s website.

Klum topped the look with low-key glam barring a killer highlight, which was on full display in a short video posted to her Instagram. In the behind-the-scenes clip, the “America’s Got Talent” judge, who wore her blond locks in her signature shaggy style, sat alongside Vergara in a car “rehearsing” their lines. Needless to say, it seems like the two were having a good time on their pre-tape assignment.

Featured alongside Klum, Vergara wore a purple and white lace corset with purple boning and matching pink-purple trousers, pairing the look with sky-high nude pumps. While the two were definitely dressed in celebrity-approved style, they clearly weren’t wearing appropriate looks to hop on the intimidating e-bike Vergara was seen holding. Looks like we’ll all have to tune into “America’s Got Talent” to see what bike-related hijinx the pair attempted in their stunning shoes. God save the Gabannas.

Put on a pair of black sandals for a chic appearance.