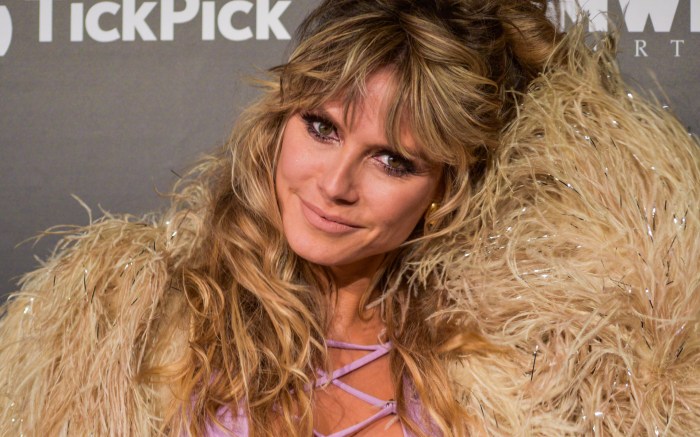 Heidi Klum makes a strong case for eye-catching metallics. The “Making the Cut” star shared a video on Instagram Wednesday that showed the model dancing in a chic look on the beach while her song “Chai Tea” with Snoop Dogg and WeddingCake played.

For the outfit, Klum wore a gray tweed overcoat that featured a herringbone print and a belt that she ditched tying to give her outerwear movement while she danced. Underneath, she wore a metallic silver minidress that incorporated a corset design on the top half with accented hips on the lower half of the garment. For accessories, she donned a pair of sleek shiny sunglasses and dangling gold earrings.

To complete everything, she wore a pair of platform Crocs clogs that had colorful Jibbitz.

When it comes to Klum’s sartorial tastes, she tends to fancy trendy and modern pieces that showcases her affinity for chic silhouettes. For example, we’ve recently seen her wear a black and white tie-dye dress paired with black thigh-high boots that displayed her penchant for eye-catching patterns. And we’ve even seen her wear a latex catsuit juxtaposed to pointy black boots for a movie premiere that showed Klum can pull off racy styles as well.

The “America’s Got Talent” judge has made a name for herself within the fashion industry over the years. She has starred in campaigns for Liz Claiborne and Marc Jacobs. She also hosted Victoria’s Secret’s famous fashion show for many years during the early aughts.

Put on a pair of black rubber clogs for a cozy, comfy look.