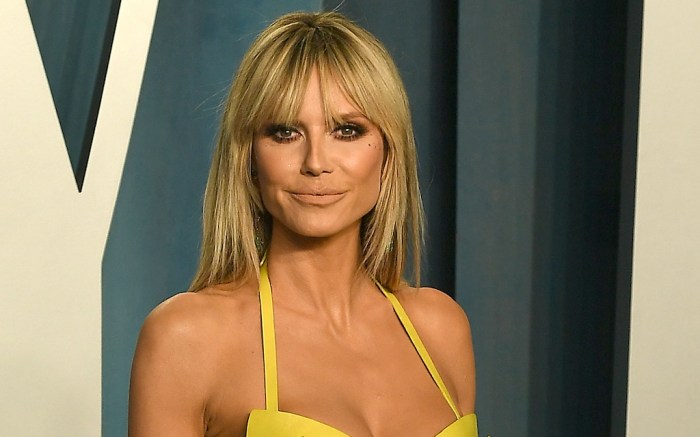 Heidi Klum gives another lesson in wearing patterns. The “America’s Got Talent” judge shared a video on Instagram today that showed her dancing and posing with Pabllo Vittar, a new guest judge on her TV show “Germany’s Next Topmodel.”

In the video, Klum wore a plaid turtleneck bodycon minidress that had touches of red throughout. Klum didn’t wear any accessories, but she did choose a pair of black stockings that had a chic black line running down the middle.

The supermodel completed everything with a pair of black platform boots. The shoes had a height of approximately 3 inches and came up to her calf. The boots also featured black slick leather uppers that added a rough touch to her flirty ensemble.

Alongside Vittar, who also opted for platform boots, an exuberant Klum is seen vigorously dancing — dipping and twerking until she collapsed, falling flat on her back. She was feigning exhaustion, of course. Still, the TV presenter made a wise choice in platform boots as the silhouette provided security for her ankles and calves, and the flat sole allowed her to remain nimble on her feet.

When it comes to Klum’s style, she tends to fancy modern and trendy silhouettes. For example, she recently wore a Dolce & Gabbana floral maxi dress coordinated with black strappy sandals for an ensemble suitable for the impending warm spring weather. Also, she wore a dominatrix-themed all-black latex outfit that had sheer cutouts paired with matching latex thigh-high boots for an edgy appearance.

The “Making the Cut” host and judge has made a name for herself within the fashion industry over the years. She’s hosted Victoria’s Secret’s famous runway show for many years during the 2000s, and she walked in some of the shows in the ‘90s. She has also starred in campaigns for Liz Claiborne and Marc Jacobs.

Put on a pair of black platform boots for a streamlined finish.