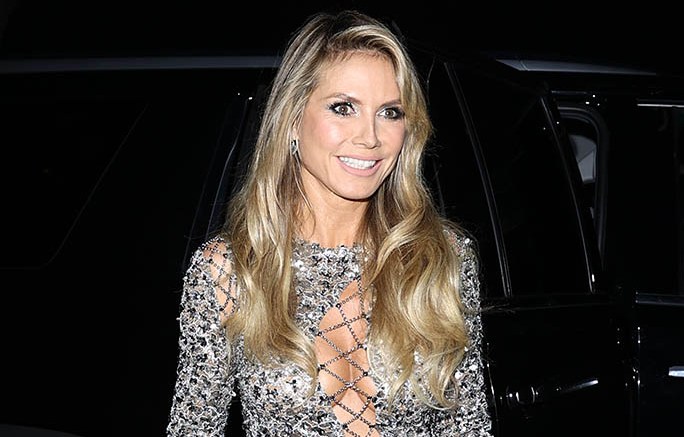 Heidi Klum made a daring statement at ELLE and Dolce & Gabbana’s 2022 Women in Music event at Olivetta restaurant in Los Angeles on Thursday night. The German model joined a group of A-listers at the intimate dinner including Doja Cat, Tyga, Normani and Ashlee Simpson and Evan Ross.

Klum pulled out a head-turning ensemble for the occasion. The “America’s Got Talent” judge wore a metallic mini dress by Peter Dundas. The long-sleeve piece featured silver embellishments allover and risky chain cutouts that wrapped along her torso, down her leg, and across her back. She was clearly feeling monochrome at the moment, adding a reflective silver clutch and small hoop earrings.

The 49-year-old television personality complemented her look with silver sandals. The shoes paired well with her show-stopping mini dress. Klum’s particular footwear featured a thin strap across the toe, around the ankle and sat atop of stiletto heel.

Heeled sandals are a sleek staple during the warmer months. Many silhouettes feature a simple strap across the toes and a faster strap around the ankle, creating a barely-there construction.

When it comes to Klum’s essential clothing tastes, she tends to gravitate towards chic and modern silhouettes. The former “Project Runway” host and judge is known for creating her own lane within the fashion industry. She has starred in campaigns for brands like INC, Skims and Jordache. Her shoe lineup includes sleek boots and sandals from brands like Valentino, Dries Van Noten, R13 and The Row.