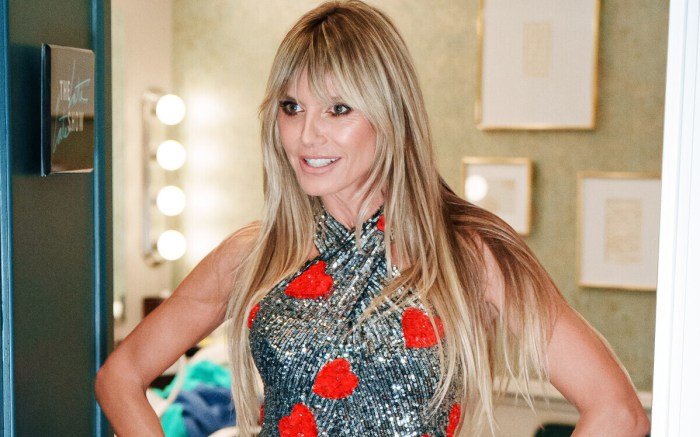 Heidi Klum celebrated her husband Tom Kaulitz’s 33 Birthday in the lap of luxury via a private jet in a post on Instagram made yesterday. The supermodel gathered everyone from Bill Kaulitz, Tom’s twin brother, to close friends to celebrate the rock star’s big day, donning festive hats and dishing out a cake for the occasion.

While off duty, the “America’s Got Talent” star slipped into distressed white and light blue denim, the distressing mainly focused on the knees of the pants. The jeans were belted with a black leather belt decorated with silver eyelets that secured the trousers in place. The German-American paired the grungy bottoms with a pink floral crop top, diverging from full on grunge. The slouchy style was coordinated with a black bralette underneath that peaked past the wide neckline when Klum moved. With a crown on her head and a pink scrunchie on her arm, Klum was ready to celebrate her lover’s birthday in style.

The gothic elements in the former “Project Runway” judge’s outfit were carried down to her footwear, the public figure lacing up black combat boots. Although they are hard to see, the shoes feature rounded toes, black laces, and a massive rubber platform soles that made the 5’9 model even taller.

Originally designed to be worn by soldiers on the battlefield, combat boots are utilitarian footwear created for foot protection, ankle support and a gripping tread. Classically made of black leather, combat boots were adopted by counterculture movements in the 1980s and 1990s, like the goth, punk, and grunge scenes.

The “Making the Cut” host’s recent shoe lineup has included sleek boots and sandals from brands like Valentino, Dries Van Noten, and R13. When on the red carpet, Klum has been seen in pumps and mules from Gianvito Rossi, The Attico, and Femme LA.