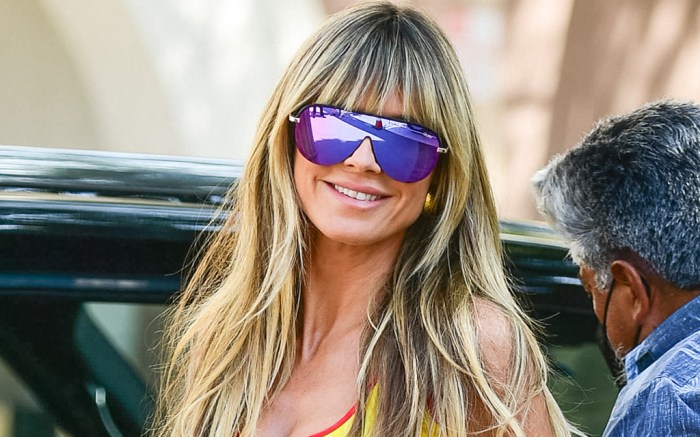 With bright yellow on top and dark purple on the bottom, Klum’s garment was striped and stitched in red, making for a whimsical pairing of colors.

The former “Victoria’s Secret” Angel wore futuristic mirrored sunnies, also in purple, and carried around a red purse with gold hardware to match the zig-zag stitching in her ensemble. Beyond that, Klum accessorized minimally, popping on a few silver rings and chunky gold hoops. The fashionable figure styled her blond tresses down in a wind-swept way with lengthy front-facing bangs, while her features were accentuated with natural tones.

The “Making the Cut” host is not always in slick boots however. In recent years, Klum’s shoe lineup, on and off duty, has included sleek boots and strappy sandals from brands like Valentino, Dries Van Noten, and R13. When the occasion calls for it, Klum has been seen in pumps and mules from Gianvito Rossi, The Attico, and Femme LA among other well known brands. Klum’s career extends far beyond wearing fashionable shoes. The German-American began her career modeling for Victoria’s Secret, Sports Illustrated, and even Givenchy.