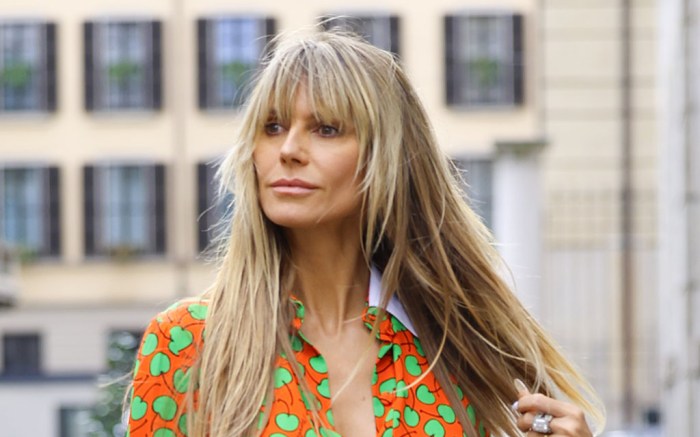 Spending her days in a fashionable way, Heidi Klum was snapped for street style photos during day two of Milan Fashion Week in Milan Italy today. While the scenery may have been different from her home in Los Angeles, Klum took over the streets, the model styling whimsical neon wears with matching footwear.

Klum’s love of bold colors and patterns really shines through thanks to the collared Moschino midi dress she’d worn fitted with a blindingly bright orange and green cherry pattern. The garment featured long sleeves set in place with white cuffs, the dress buttoning up the front allowing Klum to adjust every now and again. The “America’s Got Talent” judge carried a matching tweed purse to her side and accessorized with a few silver statement rings. As for her hair, Klum wore her blond strands straight down accompanied by some face-framing bangs.

Coordinating with her dress and accessories, Klum stepped into Moschino thigh-high boots adorned with the same playful cherry print on her dress, the footwear just as colorful as the rest of her ensemble. The leather boots sported rounded toes and block heels that looked to be about three to four inches tall.

Klum’s shoe lineup, on and off duty, has included sleek boots and strappy sandals from brands like Valentino, Dries Van Noten, and R13. When the occasion calls for it, Klum has been seen in pumps and mules from Gianvito Rossi, The Attico, and Femme LA. Klum’s career extends far beyond wearing fashionable shoes. The German-American began her career modeling for Victoria’s Secret and Sports Illustrated.