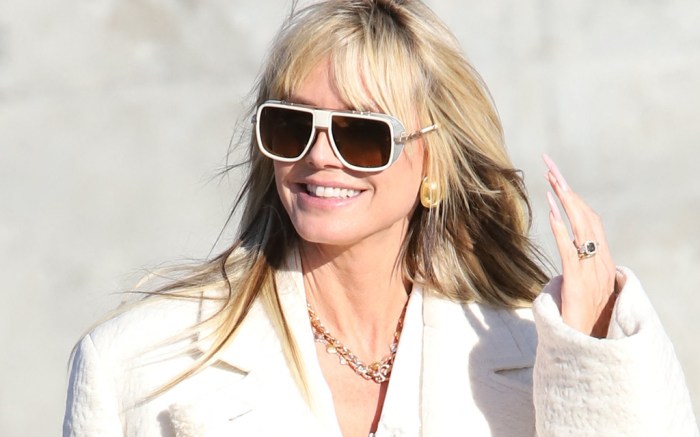 The former Victoria’s Secret Angel was wrapped up in a lengthy white coat with a distressed, almost stringy texture. The model layered the warm garment atop a white blazer jacket and breezy high-waisted white denim with a flared hem.

As for accessories, Klum hid her features with large white sunglasses, pairing them with golden rings, studs and a chain necklace. “America’s Got Talent” judge wore her long blond locks down, letting the wind wildly sweep her hair up in every direction.

The model saddled up in a rustic pair of white leather cowboy boots with white stitching. Cowboy boots are a classic Americana shoe style marked by a pointed toe and an elevated stacked slanted leather heel.

Most often made of leather, cowboy boots have a shaft that extends almost to the wearer’s mid-calf. This style of boot often features artistic inlay and overlay designs as decorative features up the shaft and across the vamp.

Klum’s recent shoe lineup has included sleek sandals and boots from brands like Valentino, The Row, Dries Van Noten and R13. When hitting red carpets and other formal events, she’s also been seen in bold pumps and mules from Gianvito Rossi, The Attico, Femme LA and more top brands.

However, her career extends far beyond wearing fashionable shoes. Klum began her career modeling for Victoria’s Secret, Sports Illustrated and Givenchy, and has even founded her own lines of intimates, clothing, swimwear and perfumes with German grocery store Lidl.