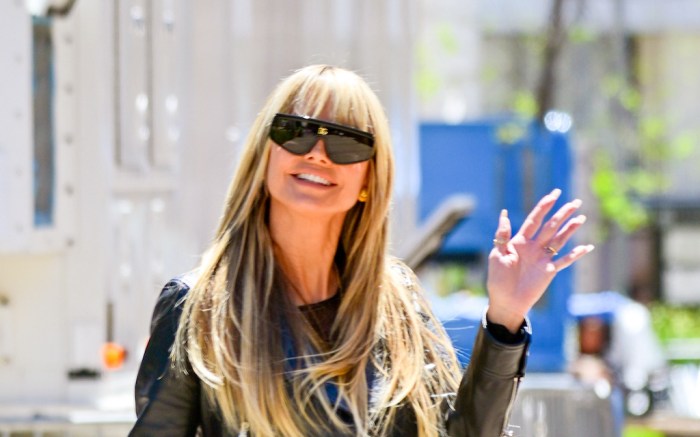 As of late, Heidi Klum has arrived at her day job in really stylish ways, and her newest ensemble doesn’t disappoint.

On Wednesday afternoon, the “Making the Cut” host and judge got spotted arriving at the set of “America’s Got Talent” in Los Angeles while wearing a dark look for the day.

When it comes to the outfit, Klum donned an all-black monochromatic number consisting of a sharp leather jacket for outerwear. The piece was cropped and had silver hardware and flouncy lapels for a neat finish. Underneath, she went with a black dress that had a high neckline and featured sheer black paneling that created volume when she moved.

Klum kept her accessories simple and opted for a black handbag teamed with gold embellishments and a pair of sleek black sunglasses.

Tall black slouchy leather knee-high boots completed her sleek attire. The shoes had a height of approximately three inches and had a pointed-toe design that gave a modern feel.

When it comes to Klum and her sartorial tastes, she tends to gravitate towards chic and modern silhouettes. For example, she recently donned a black and yellow striped matching outfit paired with chunky black platform boots while arriving at the set of “America’s Got Talent” earlier this week.

The former “Project Runway” host and judge is known for creating her own lane within the fashion industry. She has starred in campaigns for brands like INC, Skims and Jordache. And in 2017, she launched her own clothing line in collaboration with the German retailer Esmara, which was a line of affordably priced statement pieces.

Put on a pair of black slouchy boots for a streamlined finish.