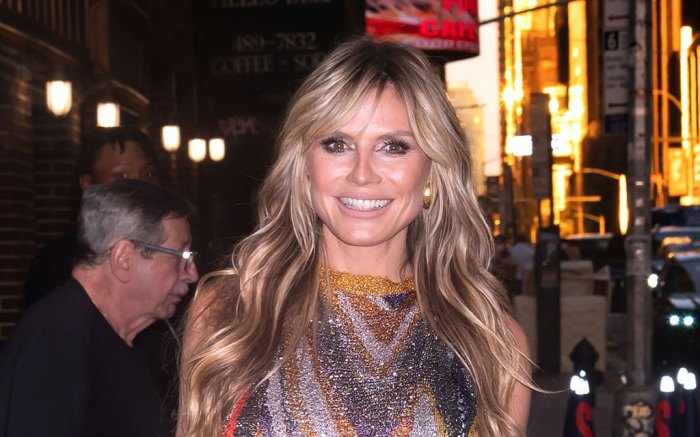 Heidi Klum shared a hilarious moment with her costars and “America’s Got Talent” judges Sofia Vergara and Howie Mandel on Instagram. Klum uploaded a short clip on Tuesday, which shows her struggling to get the perfect photo of her outfit.

The video begins with Vegara taking Klum’s pictures as she poses on a plush beige couch until Mandel eventually walks in and interrupts the impromptu photoshoot. Vergara later asks Mandel to take a picture of her and Klum together. The “Deal or No Deal” host pretends to snap a shot of the duo but doesn’t succeed at the job.

“Do you think he got the shot?” Klum wrote under the recording.

Klum was a burst of color. She took color blocking to a new level by pairing a sparkling orange blazer with a light pink button-down shirt. The German model completed her look with glittery hot pink pants and baby pink strappy sandals. The shoe style featured a thin strap across the toe, around the ankle and were set on a thin stiletto heel.

Vergara followed in Klum’s footsteps and opted for shimmery silhouette. The “Modern Family” star wore a strapless black dress that featured feather details on the bust and on the hem. Completing her look was a pair of towering platform sandals.

Mandel looked sharp in a black suit that he complemented with a vest and white under shirt. He tied his look together with trousers and sleek white sneakers.

When it comes to Klum’s essential clothing tastes, she tends to gravitate towards modern silhouettes. The former “Project Runway” host and judge is known for creating her own lane within the fashion industry. She has starred in campaigns for brands like INC, Skims and Jordache. Her shoe lineup includes sleek boots and sandals from brands like Valentino, Dries Van Noten, R13 and The Row.

PHOTOS: See more of Klum’s style through the years.

Add a pop of color to your ensemble with pointy pink pumps.