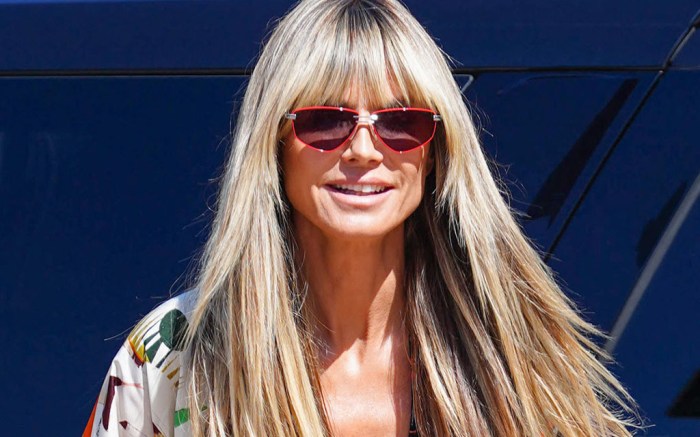 Heidi Klum arrived on set for “America’s Got Talent” yesterday in Los Angeles, mixing colors and patterns in the chicest way.

The model wore a colorful and certainly eye-catching ensemble that was comprised of a jumpsuit made up of multiple prints with a lengthy cardigan overtop in a matching fabric.

The jumpsuit featured a mirrored image of a tropical island scene, and the cardigan was made of geometric shapes in every color imaginable. While both pieces seem like they would clash, somehow, Klum makes them work.

The former “Victoria’s Secret” Angel donned a black and white checker print bag with a chain crossbody style and popped on thin red geometric shades to match her layered outerwear. To accessorize, Klum wore simple silver rings and nothing more.

Concluding the bold outfit, Klum wore black and white snakeskin boots with angular toes and sharp stiletto heels. There’s no telling how long or short the shoe style is thanks to the lengthy eclipsing hem of the jumpsuit. The silhouette of the animal printed footwear is vaguely reminiscent of a cowboy boot because of the prominent toes and wild print, but the style differs because of the sharp heels and height that they provide.

The  “Making the Cut” host’s recent shoe lineup has included sleek boots, animal print or not, and slip-on sandals from brands like Valentino, Dries Van Noten, R13 and The Row. When hitting the red carpet and events circuit, the German-American has also been seen in bold pumps and mules from Gianvito Rossi, The Attico, Femme LA and more top brands.

Klum is not just a lover of clothing and shoes however. The star’s love of fashion began with her modeling career for Victoria’s Secret, Sports Illustrated and Givenchy. Klum has even founded her own line of intimates, swimwear, perfumes and clothing with German grocery store Lidl.

PHOTOS: Click through the gallery to see some of Heidi Klum’s best red carpet looks.