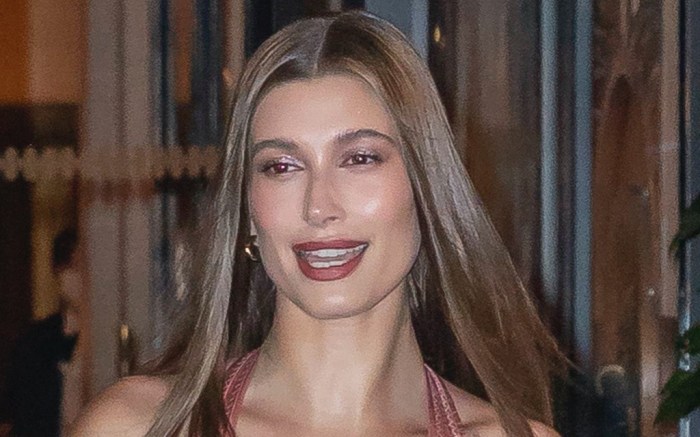 While arriving in the City of Lights during Fashion Week, Bieber left her hotel for dinner in a pink silky knee-length dress. The style featured a rounded neckline with thin straps that created a halter-neck silhouette. With front draping complete with a side knot and delicate earrings, as well as straightened blown-out hair, Bieber’s ensemble channeled the same Y2K aesthetics from films like “Mean Girls” and “The Princess Diaries.”

Adding a rock ‘n’ roll element to Bieber’s outfit was a pair of chunky platform boots, courtesy of celebrity-favorite brand Naked Wolfe. Bieber’s ’90s-inspired Spice Black Stretch style featured rounded toes, as well as knee-high uppers and silver wolf head-shaped accents on their counters. Their most daring features, however, were chunky platform soles and 5.11 inch-high heels. The boots elevated her look with a height boost, and gave it a futuristic edge. Her shoes retail for $350 on Nakedwolfe.com.

Platform boots are a top trend this winter, with thick-soled styles such as Bieber’s adding a height and comfort boost. Towering pairs with block heels or ridged soles give most ensembles an added edge, as well. In addition to the influencer, styles from Balenciaga, DKNY and Prada have also been spotted on Olivia Culpo, Carrie Underwood and Khloe Kardashian in recent weeks.

Bieber has been a darling of the fashion industry for quite some time, appearing in campaigns for Guess, Ralph Lauren, Tommy Hilfiger and Zadig & Voltaire. The media personality also starred in Levi’s summer ’20 campaign with Jaden Smith, joining the brand to celebrate its annual 501 Day event in 2021. Previously, in 2016, Baldwin starred in Ugg’s Classic Street Collection campaign as well.

The star’s shoe closet includes an eclectic mix of streetwear sneakers and sleek heels. Aside from Superga sneakers, which Bieber’s been an ambassador for since May, she also wears kicks by Nike, Chanel and Off-White. On the more formal front, the model favors embellished heels from Tabitha Simmons, Jimmy Choo and Amina Muaddi, among other top brands.