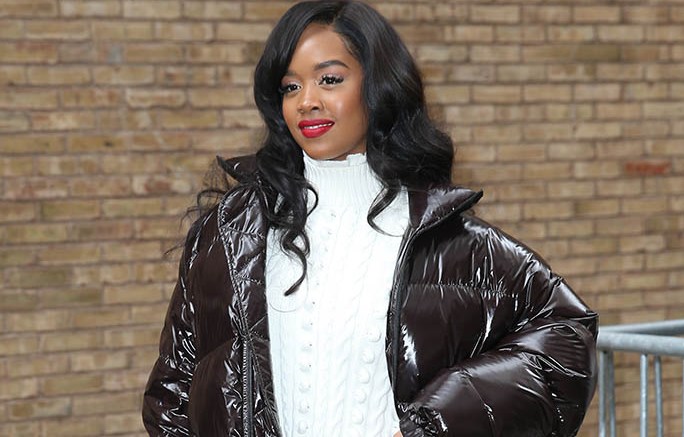 H.E.R. bundled up to combat the chilly New York City temperatures. The five-time Grammy Award-winning singer was spotted leaving the “Live with Kelly and Ryan” set on Dec. 8. She will make an appearance on the morning talk show on Dec. 9.

The “Where I Go” musician was chicly dressed to tackle the cold east coast temperatures. H.E.R. wore a knee-length chocolate latex puffer coat. The outerwear had a wide, high collar, zipper detailing at the center and drawstrings at the hem.

She teamed her jacket with a white turtleneck knit sweater. The top was streamlined with loops throughout and also included a curved thick black hemline. H.E.R. styled the garment with form-fitting leather leggings.

To further elevate the moment, the “Slide” artist went with shimmery eyeshadow and added a pop of color with a bold red lip. H.E.R. parted her hair on the side and styled it in soft waves.

Completing the Academy Award-winning songwriter’s look was a pair of black leather knee-high boots. The silhouette had a sharp pointed toe and sat atop a stacked triangle heel.

When it comes to fashion, H.E.R. has a cozy and chic fashion sense that she displays both during live performances and appearances. For footwear, the “Feel a Way” hitmaker tends to gravitate towards towering platforms and stylish sneakers.

PHOTOS: See how more stars style boots in the gallery.