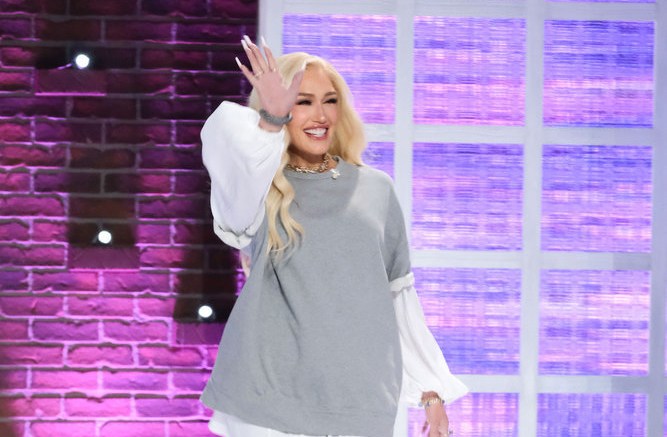 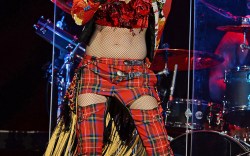 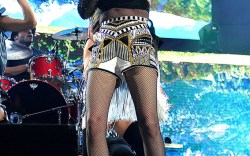 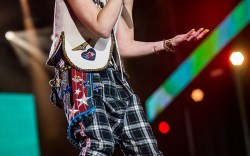 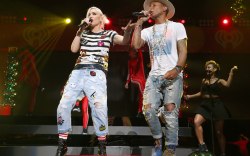 Gwen Stefani took selfies to a new level today. The singer decided to not photograph her look but to film herself posing in front of the mirror instead.

The coach on NBC’s “The Voice” sported a new pair of DSquared2 jeans. The denim featured intricate brown, white, red, blue, and denim patchwork. Underneath the denim, the singer wore a pair of high-waisted fishnet tights, rising higher than the waistline of the denim. On top, Stefani kept things casual with a basic white cropped tank. For jewelry, the singer-songwriter wore her usual three diamond-encrusted chains which read, “GXVE,” “Stefani,” and “Shelton.” She also wore a collection of gold bracelets on one wrist and rings across both hands.

Founder of GXVE Beauty can’t get enough of white boots, especially ones with a western flare. Stefani sported a pair of white pointed-toe boots with fringe flaps. Stefani has been styling white pointed-toe boots and fishnets for years now. She’s been spotted styling her array of boots with dresses, jeans, cargos and more. One of her more iconic pairs of white boots is a pair from Gucci with embroidered floral prints and crystal embellishments.

For glam, Stefani was wearing her own make-up line, GXVE Beauty. In the Instagram post, she tagged the two lip products she was wearing. They were the Bubble Pop Electric High-Performance Lip Gloss and Anaheim Line Clean Waterproof Lip Liner. She also had on thick black eyeliner and her blond hair was put up in a high bun.