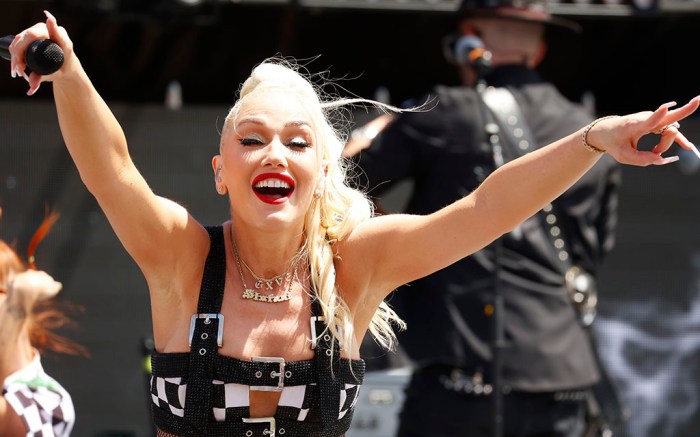 Gwen Stefani recently brought a dose of punk rock style to an unexpected setting. On July 24, the 52-year-old singer performed at Hy-Vee IndyCar Race Weekend in Iowa, wearing a hyper-patterned look for the outdoor concert.

Before the final round of the Hy-Vee IndyCar Race Weekend at Iowa Speedway, Stefani took the stage to perform some of No Doubt’s greatest hits and a collection of her solo tracks in an hour-long set.

For the gig, Stefani wore a black and white checkered bra top paired with white patterned leggings featuring palm fronds, leopard print and checkered print. The singer wore fishnet tights under the pants, which extended up her torso to meet the bottom of her bra top.

Stefani wore a skirt-like overlay on top of the pants featuring a pleated diamond-printed panel at the front and tassel detailing at the sides and back. The overlay had a peplum-like accent at the hips in the same material as Stefani’s pants.

The singer wore a black fabric harness with belt buckle detailing over the entire look. For footwear, Stefani wore black combat boots, tucking her leggings inside.

Stefani wore signature platinum blond hair in a high statement ponytail. Her makeup was done in her signature style, featuring an intense red lip and a fierce winged eye.

The singer recently wore a similar busy outfit on Instagram, signaling a style shift for the star. In a video promoting her new single “Light My Fire,” which features Sean Paul and Shenseea, Stefani wore a short neon green and yellow asymmetrical dress featuring intense patterns and textures. She layered the piece over a long-sleeve black mesh top, pairing the look with black and neon green cowboy boots.