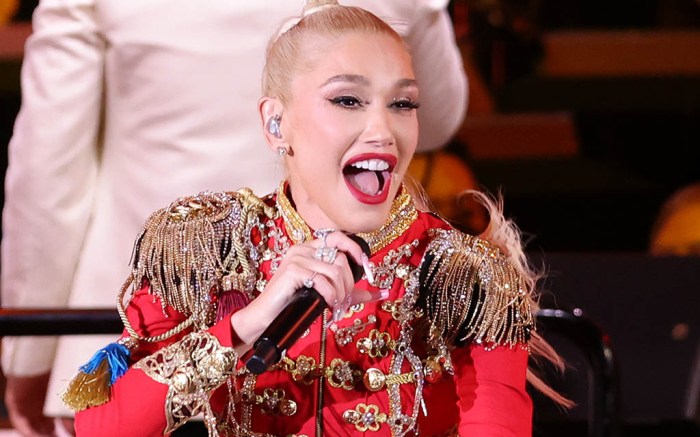 Gwen Stefani helped the Hollywood Bowl celebrate its 100th birthday with a riveting performance complete with extreme costuming on Saturday in Los Angeles.

Stefani wore a garment with multiple embellishments, getting more glamorous as she got to the stage. The look saw vinyl black pants and a ringmaster-inspired coat complete with decorative gold clasps and pins. The jacket was broad and squared off at the shoulders while the rest of the garment was fitted and tailored to Stefani’s frame.

As she reached the stage for her performance, Stefani donned a large black skirt to amp up the drama. The front of the massive piece was kept open for ease of movement. The look wasn’t complete without black platform Dr. Martens boots that Stefani wore, making her presence grand on stage with all that extra height. It was a concert to remember, with an unforgettable outfit too.

Opening Night at the Hollywood Bowl kicked off the iconic venue’s celebration of its first 100 seasons with a lineup of
sensational performances featuring Gwen Stefani, LA Phil Music & Artistic Director Gustavo Dudamel, and the Los Angeles Philharmonic. The LA Phil opened the evening with the world premiere of Centennial Overture, written by legendary composer John Williams, who made a surprise guest appearance to conduct the work commemorating the 100th anniversary of the Hollywood Bowl. The Opening Night at the Hollywood Bowl benefit concert raised more than $2.46M for the LA Phil’s learning and community initiatives and programs (including YOLA), which serve more than 150,000 youth, families, and teachers every year.

Click through the gallery to see some of Gwen Stefani’s best street style looks.